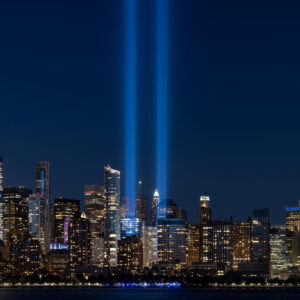 Like most of you, I can remember exactly where I was when the first plane exploded into the World Trade Center on 9/11/. Surprised, at first I thought a terrible accident had just occurred. Rushing to a TV to see what was happening, while the heroic rescue efforts were underway, I witnessed the second crash as it happened.

Stunned and in disbelief, it was hard to take it all in. I thought, “This simply can’t be happening—not in America, not in the land of the free and the home of the brave.” But it was happening.

Now fixated on the fast-moving events, I watched in horror and amazement as New Yorkers fled the scene, disheveled, disoriented, and caked with soot from the collapsing skyscrapers. As I flipped from CNN to other coverage, I saw jubilant Muslims in the Middle East greet our disaster with shouts of joy. Our nation had been rocked to its knees, and those who hate us cheered at the devastation caused by this unprovoked attack, hoping that we would be unable to sustain such a blow.

The glee of our enemies was short-lived though, as Americans came together as a unified nation—just as those before us came together when attacked at Pearl Harbor. In the weeks that followed, we were not a nation of Liberals or Conservatives, Democrats or Republicans, blacks or whites. We were Americans—people who had come together in a united effort to bring to justice those responsible for their barbaric, murderous cruelty.

We not only made it through, but we also thrived, as love of country and a shared destiny prevailed from one coast to the other. Like few time before in our history, people put their nation first—their self-interests second.

Now, as the twenty-first anniversary of the attack on the World Trade Center and Pentagon is here, we couldn’t be more divided. Enmeshed in the aftermath of the horrors of a life-altering pandemic, with staggering debt, massive inflation and open borders, it looks to many as if we may be in irreversible decline as a nation, but we are not.

Those who wish us ill abroad and domestically hope this is true, but patriotic Americans like you and me don’t believe this is true for a second. In fact, we believe that America’s best days are ahead of us, not behind us. Our purpose is not yet complete—not by a long shot—but we have to fight the Progressive Democrats who want to take us down to achieve our destiny.

It won’t be easy. Nothing of value ever is. Our Founding Fathers did it, so did the Greatest Generation, ridding the world of NAZI Germany and the Empire of Japan. Now, it’s our turn to be faithful to God, to our families and to the United States of America. Indeed, it is our purpose to retake the YSA from darkness and depravity.