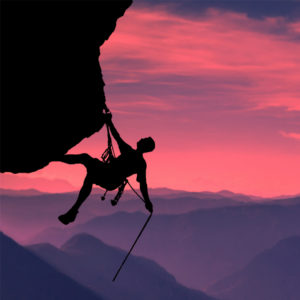 Being asked to start a women’s group in the fledgling church I attended was right up my alley.  Immediately a picture forged in my mind of women who had a divine GO in their spirits, who walked in Sarah-like faith with Deborah-like bravery.   But there needed to be one defining word to sum up the vision.  The first word that came to mind proved to be the right one: Grit–firmness of mind and spirit, unyielding courage.

A blizzard tried to hijack our first meeting, but 90 women still blazed a trail from their snow-laden driveways to attend–ironically enough my message that day was about tenacity.  A few months later, we met again and took things outside the church walls.  I prepared a team of ladies who helped me set up stations on property outside of town where the women would be trained in the fundamentals of carrying out the Great Commission–soul-winning, laying hands on the sick, casting out demons, intercession, the baptism in the Holy Spirit.  After hours of rotating them through the various scenarios, it was difficult to get them to leave.  They begged to go through the stations a second time. The men from the church who helped us with some role playing asked why they had nothing of this nature–one with tears in his eyes.  We all went to another level that day.

Not long after, it was time to meet with my leadership team and discuss the next event.  But when I arrived at our planning meeting, I was surprised to see the room full of women other than the ones I expected.   I found I was no longer in charge of the women’s ministry.  Kathy, a relative of the pastor, was now.  Because of her family ties, she was able to take it over without ever stopping to think whether or not she should.  It was a test.  I kept my mouth shut and followed her lead.

The weekend of Kathy’s event arrived and, even though I was still the opening night speaker, I was not invited to any pre-service meetings or the post-meeting dinner. As the weekend came to a close, I was asked to present Kathy with a dozen red roses for the ministry “she” had birthed.  Kathy stood and read the names of those who had played a role in the conference, asking them to stand and receive recognition.  I was sitting two feet in front of her, yet my name was never called.  I’ll admit it, I was hurt.

When the service ended, I bolted downstairs to the kitchen in the basement.  A dear friend found me crying behind an industrial stove.  With black mascara covering both sides of my face, she looked me in the eyes and said, “Every woman in this church is watching you right now to see how you handle this.”  In the face of blatant church politics, could I practice what I had preached?

Oddly, in the weeks leading up to this conference, a word kept coming up in my spirit:  Holland.  I couldn’t even find it on a map, but I sensed a leading to go there.  When I finally saw Amsterdam on my office globe, it rang a bell.  That’s when I realized Holland is officially called The Netherlands.

Movies and books about the country seemed to jump off the shelves as I walked the library aisles.  On one trip down the highway I counted 17 trucks that said “Holland” on the side.  At the mall one evening, I overhead people speaking with an accent.  When I asked where they were from, I wasn’t surprised when they told me The Netherlands. The country pursued me like paparazzi on the celebrity of the moment.  It was comforting and challenging at the same time.   A love affair was developing.  I want to say that a thousand questions plagued my mind:  What would I do if I went there?  Where would I stay?  Who would I connect with?  But that didn’t happen.  I just had a feeling that everything was going to be alright.

Wiping the mascara from my face after the women’s meeting, I headed home feeling a bit beat up.  But then something happened.  I stood in the bathroom and looked at my red, puffy eyes in the mirror and said, “NO!”   For weeks I had been skulking around wondering how Kathy could have just taken over without a word, keeping my mouth shut.  Not having an opinion and feeling like I was somehow the bad guy.  The drama was trying to make me double-minded, then I realized that the whole Kathy thing was not meant to hurt me, it was meant to free me up.  Just like the children of Israel had everything handed to them once they left Egypt, there came a time they needed to crossover.   Once they were on the other side of Jordan they had to move forward and obey God.  No pillar of fire, no cloud, just raw faith.  It was a new arena of effectiveness for them.  It was time for mine.

That afternoon I used my toe to draw a line across my bedroom carpet and prayed, “God, I am going to step across this line and when I do, I will never question going to Amsterdam again.” I raised one leg and stepped over, then the other.  Done.

Later that day at the grocery store,  the first aisle I went down had a box of cookies shaped like windmills that grabbed my attention. The second aisle had a big sign with entry blanks stuck to it that read, “Win a Trip to Amsterdam.”  I knew that I was as good as there, and I was–six weeks later.  Once I got to The Netherlands the invitations to minister snowballed and I was booked solid the entire trip.  I met former prostitutes who had become Christians and wanted to better themselves, and a man who told me he was planning to kill himself but came to hear me speak as a last resort.  Wiping the tears from his eyes he thanked me for allowing God to use me to bring healing to him that night.

My thinking was stretched, my spirit full, and my determination sweetly satisfied.  I would never be the same.  And the pain of the conference and the crying behind the stove was forgotten.  Kathy wasn’t my enemy–she actually did me a favor–she helped me cross over.  I returned to Amsterdam within the year and stayed for two months instead of two weeks, speaking 67 times in just 63 days.  It was definitely a new arena of effectiveness.  But in order to get there, something had to die so something greater could live.

Grit.  Courage. Tenacity.  I had to summon every ounce of it in order to draw the line in the carpet that day and cross over.  I’m so glad I did.  What line do you need to cross over today?