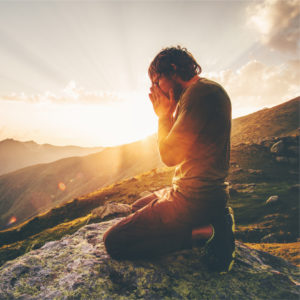 When a heartfelt cry out to God is all you have….

It was a cold winter’s night in the Allegany Mountains of Virginia when I, at the age of seventeen, needed an answered prayer in the worst way. I was on my way home from a football game and a friend of mine needed a ride. I told her I would be happy to take her home. The roads were starting to get icy; no snow yet, but you could feel the temperature had dropped pretty significantly.

We made it to her home without an issue, however, as I was heading home myself, I hit a patch of ice and the car started to drift off of the road. My wheels were spinning but I was not going forward, instead, my car was sliding sideways. On the right side of the road was a steep cliff and below the cliff was a cold, icy, rushing river. It all happened so quickly though it felt as if time stood still. My heart was pounding in my chest. I thought I was going to die.

My car was heading right for the edge of that cliff and my steering wheel was completely useless. As I was nearing the edge, I cried out, God, please save me! As the words were leaving my mouth, I felt something supernatural. It’s hard to explain, but it felt as though a hand picked up the back end of my car and set it right back on the road. If you’ve ever had a near miss, then you know exactly what I am talking about. I remember that night so vividly because I feel certain that without the help of the Lord that night, I would have been dead. God had a purpose for my life and He, and He alone, would be my protector.

Then they cried to the LORD in their trouble, And He brought them out of their distresses. He caused the storm to be still, so that the waves of the sea were hushed. Then they were glad because they were quiet, so He guided them to their desired haven (Ps 107:28-30 NASB).

Do you want to live a life of no regrets?

Do you want to make good and right decisions in your life?

Do you want to know what your assignments are?

Then you need to know how to pray, and you need to know that the prayers you pray will be heard and answered. Prayer is a tool that God grants so that we can learn how to best reflect Him, becoming more like Him as we grow to better know Him. It is an action based on a simple belief that God can and will bring about change in the course of events. It is communication with an expectation that God will lead us. It is an expectation that He will hear and answer. Expect nothing less than answered prayers.

Oftentimes, we will pray a prayer, but not expect to get an answer. That’s futile. The Word of God tells us to come boldly to the throne of grace. Prayer should be your first defense, not your last resort. Prayer will help you to build a life of no regrets simply because you learn to follow the lead of the Lord for direction. During your time of prayer, if prayed confidently in faith, God will bring about direction, conviction, clarification, inspiration, and revelation, and give you wisdom to make decisions that will help you live the best life you can live.

Living without regret is possible when you:

Is it not sweet to believe that our tears are understood even when words fail! Let us learn to think of tears as liquid prayers, and of weeping as a constant dropping of importunate intercession which will wear its way right surely into the very heart of mercy, despite the stony difficulties which obstruct the way. —Charles Spurgeon #[http://spurgeononline.com/tears-are-liquid-prayers/]