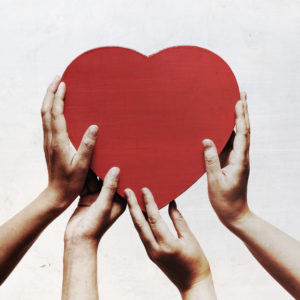 We were shopping almost shoulder to shoulder in the ladies’ department. I am ashamed to admit that in the past, I probably would have looked at her in a snarky manner and possibly even rolled my eyes.  But, at this moment, something in me would not allow it.  I gazed in wonderment, not out of judgement, simply out of curiosity.  I’m thankful I did not respond in a negative fashion because, when I looked away, my eyes met my daughter’s.  She too had noticed the unconventional shopper next to us.  The look on her face was 100% empathy.

By the time we checked out and left the store, the trans woman was sitting in the middle of the mall nervously peering at her phone.  It was then that my daughter stopped, turned on her heel and with eyes blazing said, “If you really want to love people like you say, you will give her a tract.”  I had carried a supply of Bible tracts in my purse for thirty years.  It was always the same one, because it was so effective.  It simply read, “You Are Special.”  In the  three decades I had been giving them out, I’ve only had one person turn it down.

I took one out of my purse, made sure it wasn’t crumpled, and headed straight for her.  Gently placing my hand on her back, I bent down and offered it to her telling her how lovely she looked.  When I touched her I felt an unconditional love flow from me to her.  She looked up at me with big, blue eyes and in a soft–almost scared sounding–voice thanked me, smiling sheepishly.  I wished her a good day as I left her holding the message that she is special in her large, beautifully manicured hand.

At that moment, I felt more aware of Jesus than when I preach, praise or punch the devil in warfare.  Not only that, but I realized that although we have obvious differences–her and I–we also have some similarities:  God loves us both.  Jesus died for both of us.  We both need Him.  We’ve both done things in life that were wrong.  We’ve both felt at times like square pegs trying to fit into round holes.  At that moment, I understood her better than I thought possible.

Whatever struggle she was in, she was gentle and kind during our brief interaction.  Life had not made her bitter–she had to have some sort of superpower survival instincts. I can’t even imagine the bravery to dress up like she did and go out in public alone.  I could have kicked myself later for not introducing myself, asking her name and seeing if she was open to grab a coffee.  I am by no means calling this woman a sinner, that is not for me to judge. Neither am I condoning what she may be involved in–I have no idea what her life consists of. But it reminded me of a story found in Luke 15:1-2.

“Now the tax collectors and notorious and especially wicked sinners were all coming near to Jesus to listen to Him.  And the Pharisees and the scribes kept muttering and indignantly complaining, saying, This man accepts and receives and welcomes preeminently wicked sinners and eats with them.”   It goes on to say that Jesus started telling the sinners some stories.  He talked about the joy in finding a lost sheep, a lost coin and the celebration that one father experienced in the return of his son after a sinful binge.

Have you noticed that when Jesus came across those who were in dire straits…whether the woman caught in adultery or the man full of demons…he always helped them first, then told them to stop the wrong behavior later.  It is the goodness of God that leads us to change our minds–not a harsh, judgmental attitude.  And Jesus was not afraid to be around those who didn’t look and smell like him, and talk in Bible-speak.  We shouldn’t be afraid either–greater is He who is in us than he that is in this world.

Days before my encounter with the trans woman, I took some friends to a tourist attraction.  We were struggling to find a place to sit for one of the shows when I spotted one last bleacher way at the top of the stands.  As we headed up, a woman put her leg across the aisle to block us.  I looked at her as if to say, “what are you doing”?  She removed her leg after a few uncomfortable moments in a staring stand-off and we were able to take our seats.  When I got behind this woman, I noticed she was either a teacher or chaperone with a Christian school group on a field trip–all of the children wearing t-shirts with the school logo and a Bible verse.

In my house at that very moment were workmen repairing a leak from my tub that had caused some damage.  They were rough, tough looking guys.  One had tattoos covering all visible skin except his face, and a skull ring on every finger.  He told me that when people see him they typically become afraid.  But he let me have a glimpse into his heart by telling me repeatedly about his wife committing suicide–each time I saw the deep pain he was carrying.

At about the same time the Christian woman tried to prevent us from being seated, my “scary” construction worker texted me explaining he heard a toilet running in my house.  He replaced the flapper and when I asked what I owed him for that act of kindness, the response was, “You’ve been through enough, we’ve got this, don’t worry about it.”  Big bad tattoo guy fixed my toilet for free.  Christian school chaperone, with perfect blonde highlights, didn’t want us to sit near them during a spider and snake show.  I wonder if they teach that kind of life lesson in the Christian school.

I’m glad I encountered the trans woman and the workers who had tattoos, skull rings and used expletives unashamedly.   These are the kind of people Jesus had dinner with and told stories to.  Confused, hurt and probably rejected.  I’m on the lookout for more of them.  I want to have dinner with them and tell them stories about being lost and how they can be found.  How they don’t have to be ashamed or drink their pain away.  Then I plan on inviting them to church and putting them on the front row so we can celebrate their homecoming to the Father’s house.

When the prodigal son returned he smelled of the hog pen he had been living in, yet his father told the servants to bring the “best coat” to put on him. He did not ask his son to take a bath first.

If you are reading this and you are a Christian, please don’t be mean, harsh, judgmental or elitist.  Listen, you are reconciled to God.  Now you are an agent of reconciliation as 2 Cor 5:18 tell us.  You don’t get to cherry-pick who you want in God’s family.  Jesus went after notoriously wicked sinners.  He had dinner with those who didn’t look, smell or talk just like Him. He purposely looked for women who needed devils cast out, tax collectors and even a naked demon possessed man who cut himself.  Jesus died for the meticulous, the misunderstood and the very messy.