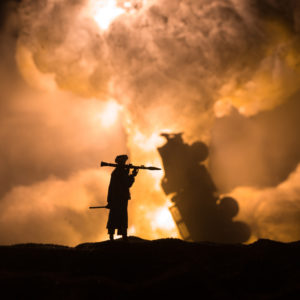 I can’t prove that what I am about to say, but I certainly believe it is true. It feels accurate. In fact, it feels so correct that I believe many of you will have an “Aha” moment after you’ve read this article. What has been bothersome to you, what has been nagging at you about what is happening in Afghanistan, will just click into place. When you finish, I believe you will understand precisely what has heretofore seemed confusing and incomprehensible.

So far, to explain the tragedy of our hasty, chaotic exit from Hamid Karzai International Airport, more people than not have pointed their collective fingers at Joe Biden’s incompetence as our Commander-in-Chief. Although Biden obviously lacks strong leadership qualities, coupled with his dementia, this answer is much too simplistic. It’s not appropriate to lay all of this at his feet. Others are equally as responsible for this debacle. His military leaders certainly aren’t demented, and the intelligence community is far from being incompetent. They have been part of every decision that has been made.

This hasn’t been a FUBAR in the true sense of this World War II term. Nor has this been a colossal mishap. That’s not even possible. Then, if this hasn’t been the case, what’s the alternative?

I believe this mess was planned all along. As shocking as this statement is, it’s what I believe is the correct assessment. This means our humiliation as a nation was scheduled to occur. Leaving Afghanistan the way we have, with our tails tucked between our legs for the entire world to see, is the justified consequence for all the wrongs we have committed against the Afghani people for twenty years. Abandoning our equipment for them to become a strong military force is the fair penance we have been required to pay. The abandoned guns, tanks and helicopters will go a long way to rectify our massive wrongs.

I feel certain this is what Team Biden truly believes. According to the Progressive Left that dominates the Democratic Party, the Deep State, the CIA and many in leadership positions in the military, the USA needs to be taken down a peg or two. The dishonorable way we are leaving Afghanistan certainly will accomplish this.

This is a mea culpa moment for Americans, meant to destroy our sense of nationalism and patriotism. It’s Team Biden’s way to teach us a lesson—a lesson we must learn. We have had several other teachable moments like this, back when Obama was President.

Remember Fast & Furious? The guns provided for the Mexican cartel were given by Obama and Eric Holder. Their goal was to show us that we needed to have our guns confiscated. Similarly, four people needed to die in Benghazi to coverup the Stinger Missiles that Obama gave the Taliban and al Qaeda in 2012. The Benghazi four were expendable—just like the thirteen Marines have been expendable in Kabul.

What we are witnessing is the same situation at Hamid Karzai International Airport, only on a much larger scale. Like the two other times and many more, there will be sabre rattling by Biden but that’s all. Nothing else will happen. You know it won’t, but it’s even worse than that. From Team Biden’s perspective, it shouldn’t. What is being meted out to the USA is our just punishment for the sins we have committed. It is appropriate for our nation’s insult to Islam. In my humble opinion, this is exactly what they believe.