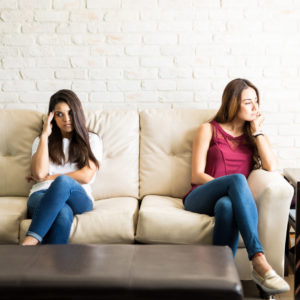 I managed a gift shop for about six months when I was between jobs, and the staff was so drama-filled they made Keeping Up With The Kardashians look boring.

Pat claimed she couldn’t afford a place to live so she called the local hotel her home–yet it cost a small fortune to reside there; she ate her meals out three times a day and smoked as many packs of cigarettes. Karen was the gossip queen–if there was a pot, she stirred it. Karen whispered tirelessly about the other employees, but when confronted, she quickly blamed it on someone else–all the while sporting a “Cheshire Cat” grin. Kinda scary.

Wanda claimed to be deeply religious, yet when she was on the clock she could often be found evangelizing customers instead of actually working. Even during peak times, she allowed the rest of the staff to struggle with the crowd as she sermonized the shoppers. Although Wanda preached Jesus with vigor, she also confessed to practicing voodoo on her adversaries. She was convinced that a former male co-worker was destined to be her husband, even though he was in a long-term gay relationship. That was not a problem for Wanda: she simply conjured up an incantation in hopes of changing all that and gave the impression that if his current partner had a mysterious accident…well, ok then.

Yes, the beauty of the glass figurines and expensive heirloom-like pieces sold in the store were diametrically opposed to the abnormalities and dysfunction that took place in this upscale setting.

The owner of the shop, Katherine, was also branded with the weirdness factor, but it was her two- year-old daughter who was to be most feared out of the entire cast. Lauren always accompanied her mom to work. At first I thought it might just be a separation anxiety thing, but soon realized there was no baby-sitter in the world that would have watched the toddler who I nicknamed, “The Beast”. I feared approaching Katherine’s office because when I did, Lauren would charge me, snarling, teeth bared and hands raised in a claw-like fashion. The closer I got she would open her mouth and, upon contact, sink her teeth deep into my thigh. Many a day I spent trying to scrub my white pants to remove her pink bite marks–her saliva mixed with the red M&M’s she was snacking on.

Whether Lauren bit me, broke something in the shop or threw her mom’s $500 phone in the toilet repeatedly, Katherine’s answer for her daughter’s behavior was always the same: “She’s tired.” And there you have it, ladies and gentlemen, my work environment.

Frustrated, I coaxed Katherine to hold a staff meeting in order to save the financially faltering business and bring some order to the place. But the Looney Tunes cast sensed something was up and all came prepared with diversionary tactics to pull on Katherine’s emotions in the event they were told to shape up. It worked. She never gained control of the meeting, nothing changed, and everyone skipped off happy that the dysfunction was allowed to continue. I stood there alone with Katherine and, before I could open my mouth, she shrugged her shoulders and said something jaw-dropping: “If we didn’t have all this drama, we would miss it.”

Webster’s Dictionary defines abnormal as, “unusual, especially in a way that causes problems.” When Katherine said she would miss the drama if it was gone, I realized that she had accepted the abnormal behavior of the employees as normal. And why change “normal”?

I was trying to save the store, trying to make sure we all kept receiving a paycheck, trying to actually run a business. But it was me vs. them, so I did the only prudent thing I could: ​Bye, Felicia​. The shop went out of business a short time later.

Maggie and I ran into each other a few times a year at Christian events and shared some mutual friends. She also had a daughter the same age as mine. Even though we lived a couple of hours apart, it seemed normal when a friendship blossomed. But after time, what was once easy quickly grew challenging. Maggie started asking for favors–but what I agreed to always cost me more than anticipated.

Soon, Maggie stopped asking for favors and started ​telling​ me what I was going to do for her. If she emailed and I didn’t respond within 30 minutes, she called and chewed me out–telling me that even Jesus was approachable. Huh?

I made excuses for her behavior. After all, she was a single mom and maybe her actions were a survival strategy. Or she didn’t really mean to treat me the way she did, but she was hurting and came across more abrupt than she meant to. The truth is, Maggie’s behavior was abnormal. If I even tried to stand up for myself, she slung guilt and shame at me without hesitation. Her actions caused me to question, “Am I crazy?” “Am I really this horrible person I’m being made to feel like I am?”

One Saturday afternoon, Maggie was scolding me for not giving her what she wanted when she wanted it. My verbal flogging was interrupted by the call-waiting beep. It was Janelle, a close friend. Janelle was easy-going, friendly, positive and empowering–and had been that way over

The two calls were so diametrically opposed to one another that it woke me up. It was an opportunity to compare them side-by-side and realize how abnormal my relationship with Maggie truly was. I had allowed the abnormal treatment I received from her to become normal in my eyes. I grew to expect the way she acted. I didn’t like it, but I expected it.

In both situations mentioned above, the behavior of the individuals was bizarre, but it was tolerated. And by tolerating it, it continued. When something abnormal is allowed to continue with no attempt to correct it, it will eventually be accepted as normal. Just ask domestic violence victims why they didn’t get out. Many will tell you things like, “That’s just the way Jimmy is.” “This is normal for us.” “This is all I’ve ever known.” They don’t want to rock the boat or fear rocking it, so they just keep floating in the boat no matter how turbulent the waters become.

Good, sane, healthy people sometimes get stuck in the web of someone else’s “crazy” for years, not even realizing the dysfunction they are entangled in until they see something healthy and say, “Hey, what in the world am I doing here? I want that normal thing over there!” Just like Janelle’s call helped me truly realize how dysfunctional Maggie was.

Oh, and remember Katherine from the gift shop? Her statement about missing the drama if it was gone was actually more true than I realized. I once had someone in my life that would send me very emotionally upsetting text messages–typically on my days off from work. It was like they saw a blip on their radar that said, “Hey, Debra has time off and is enjoying her day!” And they couldn’t resist vomiting all over it. This person would start early and go late into the day and just when I would think they were about to stop, here would come another. Drama, drama, drama. But when I didn’t hear from them as expected, I would actually check my phone, almost looking for it. Why? It had become normal for my days off to be ruined in this fashion.

Here is where I learned an important life lesson. When the enemy wants to mess with you, he doesn’t need to blow you up with a car bomb, suck you up in a tornado or wash you away in a flood. Many times, he simply sends “a person”. That’s why we need to heed Proverbs 4:23, “Keep thy heart with all diligence, for out of it are the issues of life.”

So in a relationship–whether friends, romantic or business–if things start to feel abnormal, my suggestion is to STOP, STEP BACK, THINK, DECIDE. Proverbs 25:19 in the NLT says,

“Putting confidence in an unreliable person in times of trouble is like chewing with a broken tooth or walking on a lame foot.” When you enter into a relationship with someone, you are putting confidence in them. If you have any uneasiness–if something just isn’t quite right…

1.) ​Stop​–don’t allow the relationship to progress any further. Press the pause button. That doesn’t mean cut them off, it just means don’t allow the ties to strengthen until you can:

2.) Step back​–when you step back from a scenic spot you can take in the big picture, the panoramic view. Stepping back suggests catching your breath, settling down and giving your emotions a moment to level out.

3.) Think​–engage your brain. What does common sense say about this relationship? Is it even a good idea? Do others warn you about their experience with this person? Are you confused after speaking with this person? Do you feel a sense of dread when you have to see them? That speaks of an unhealthy union. Danger, Will Robinson!

4.) Decide​–are you going forward with this individual or not? It’s one way or the other. The Jeopardy bonus round clock is ticking. If they are a gamble, what price are you willing to pay? Is this going to damage you and your family emotionally? How many second chances are you willing to give? Talk to a trusted friend who has no stake in the relationship and if you ask for advice, take it!

If a break from a relationship is in order, you don’t have to hurt the person. Distance yourself slowly if possible to avoid drama. Send their texts and emails to a spam folder–works great!–you’ll never even know the messages exist. Use the peep hole on your front door and, if necessary, block on social media.

Listen, if someone had a deadly disease–best friend, relative, or not–you would still wear a surgical mask in their presence. So you decide: If a relationship seems abnormal will you 1.) work on the health of the relationship with the person, but keep your mask of self-protection on 2.) keep your distance and proceed with caution or 3.) send that relationship to the quarantine zone and leave it there indefinitely.