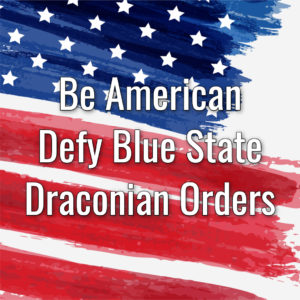 Nothing can be clearer than the desire of Blue State Democrats to deny your civil liberties, infringe upon your right to free assembly and to abridging your right to worship God. By keeping their states shut down while taking a paycheck themselves, the goal of these dictatorial Democrats is to defeat President Trump in November. Unfortunately for millions of Americans, you will be impoverished in the process. They don’t care.

The malicious tyrants who rule New York, New Jersey, Pennsylvania, Michigan, Illinois, Washington, California and several other states are giddy with delight that the unemployment rate is getting so high. Embracing their cynical strategy to remain closed f=indefinitely, many states still don’t even have a plan for reopening. This will destroy the United States, but that’s okay if they can “get Trump” in the process. That millions of hard-working Americans will be destroyed is acceptable collateral damage to the Democratic Ghouls who have established one job-killing, draconian measure after the other.

Like good soldiers, we are expected to shut up and do exactly what these Democratic Governors say. If we don’t, using Gestapo tactics, they punish Americans for exercising their 1st Amendment rights, even though they have no right or legitimate power to do so. To a person, these Governors think they know better than we do, but they don’t. Georgia and Florida have opened up successfully. Numerous other states are now following suit, but not the Blue State Democrats. They have doubled down on repression.

What utter nonsense. We call ourselves the “land of the free and the home of the brave.” It’s time that we start acting like it.