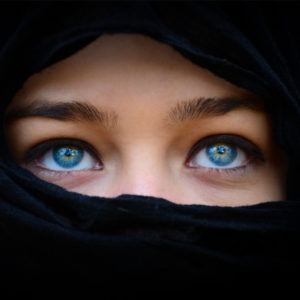 He was hiding. He had put on a good face, as he encouraged his men. “Fight bravely. You are capable of winning this war. Have courage, men.” He held up his sword and shook his fist. No one noticed his hands as they trembled in fear or saw the truth behind the fierce-looking eyes. The warrior king was afraid. That’s right, the mighty king of Israel had separated himself from God, and all courage now failed him. He knew that it was only by the favor of God that he and his people were safe, and yet, the king couldn’t bring himself to admit that he was wrong. Stubborn and arrogant, he pretended that he had courage. If only he would humble himself and repent, but no, he was on a path of self-destruction.

It took a young man named David to see beyond the mask that King Saul wore. His words went straight to the issue. David said to King Saul, “Oh King, let not your heart be troubled.” From that point on, the battle belonged to David. He had exposed the truth that the king had been hiding in fear. David faced the fears of the king and killed a Philistine giant. From that day on, Saul could no longer hide. His mask had been removed.

Saul put on a good face, but it wasn’t his own. He was hiding. We all, at one time or another, hide. We put on a good face and pretend that all is well when in truth, we are struggling with something. What are you hiding behind? Do you have a mask that covers the truth in your heart? It can be humbling to admit that life is difficult and that you need help, but we shouldn’t fear facing the truth. David often cried out to God, telling him that he needed God to create a clean heart in him. He would tell the Lord to examine his heart and find the truth. He wasn’t afraid of humbling himself before God and before others. His was a lasting dynasty while Saul’s dwindled away.

Saul wasn’t just hiding from the giant Goliath, but he was also hiding from God. He knew he had done wrong, and yet he chose to hide instead of repent. Our nation is facing some of it’s most challenging days. Our country (USA) has hidden behind education, finances, and military might.  In vain, we have tried to hide our failures. We have pretended to be strong, while our moral fiber has been decaying. We have also attempted to hide from God. Unable to admit the truth, we have pushed on, hoping that no one would see what was behind the mask we wore.

Now times have changed. We have been exposed for the whole world to see. We are broken and bleeding. Not only are we facing illness, but we are facing fires, hurricanes, and political unrest.  We could shake our fist like King Saul and pretend that nothing is wrong, or we could become a nation of Davids. We could humble ourselves and repent. We could gather up our dirty laundry and make things right with our God. Will we as a nation rise from these days of trials, stronger and become better than ever, or will we just dwindle away? The question is one we each must answer.

For me, my prayer is, “Create in me a clean heart, oh God, and renew a right spirit in me. Don’t cast me away from your presence, but teach me your ways. Change my nation, Lord. Start the change in me.  Change my heart and make me more like you.”

Create in me a clean heart, O God, and renew a right spirit within me. Cast me not away from your presence, and take not your Holy Spirit from me. Restore to me the joy of your salvation, and uphold me with a willing spirit.