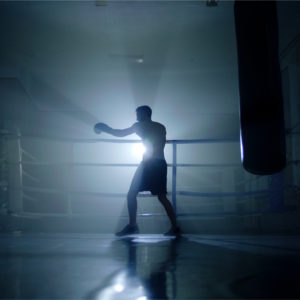 It was like he was born to fight. He came into this world fighting, and he never stopped until the day he wrestled with God.  As a young man, he argued and fought with his brother until the situation got out of control, and he had to leave town in a hurry. Never looking back, he took that fighting spirit with him everywhere he went. He found a man twice the contender as he and fell in love with his daughter.  Jacob prepared to marry the woman only to find out, the day after the wedding, he had been deceived by his new father-in-law, and he had been married to his sweetheart’s sister. Now he was obligated to remain in the employ of that man in order to marry the love of his life.

In Jacob’s home someone was always upset.  The sister-wives fought, the children fought.  His father-in-law fought.  Everyday was filled with turmoil.  He was finally tired of all the fighting and wanted to go home.

Jacob had wrestled with his twin brother, Esau, even in the womb. He wrestled with him as a young man, and now on the way home, Jacob remembered the reason he had run away from home in the first place.  Esau.  He had stolen his brother’s blessing, and Esau wanted to kill him.  Was his brother still mad?  What kind of fight would there be waiting for him at home?  Was he just running from one battle, only to enter another?

The night before he reached home, Jacob kissed his wives and children goodnight and went off alone to think.  For the first time in his life this fighter was afraid.   The Angel of the Lord appeared to Jacob while he was alone.  It was at that moment in his life that the fighter had met his match.  Jacob fought the man all night, not knowing he was fighting God.  When the sun came up God said, “it’s time to stop fighting.”

Jacob knew this was no ordinary man and said, “No.  Not until you bless me.”

The Angel of God, knew from the very beginning how to defeat Jacob, and He touched him in the hip, causing Jacob to lose his grip and fall.  In that moment, God spoke a blessing on Jacob and changed his name from Jacob-the fighter to Israel-God prevails.  At that moment, the fight in Jacob was gone.

It is interesting that in common translations of the Bible the authors say that the Angel of the Lord said to Jacob that Jacob had fought with men and with God and he-Jacob had prevailed.  But in the original language it means, you have fought with men and with God, and God prevailed.  Finally Jacob quit fighting, God had won, and the fight was over.  When The Angel of the Lord touched Jacob the fight went out of him.  Did he fear, yes a little as he faced his brother but there was nothing left to fear.  The fight had gone out of Esau as well.

We are in a battle.  There are debates going on all over the world.  No one knows what the future holds and that confusion brings fear to many.  Will we get back to normal?  Do I need to stock up on food?  Can I leave my house and go back to work.  What about the plans for the rest of the year?  How can we plan when there is so much we don’t know?  Perhaps you are one of those people.  Fighting to stay alive, fighting to make some sense of what is going on.  Fighting to pay the bills, fighting to keep the kids happy and fighting to sleep at night because everything is so uncertain.

I pray, that the Spirit of God touches you right where you are and that He gives you peace, that the fight goes out of you, and that you can rest knowing that God is in control.  I pray that peace is in your home, your marriage, your kids, your job, and your future.  I pray that as we struggle together, we find that the fight has gone out of us and that whatever we face in our  tomorrows, will be easier than we thought.  I pray that as you give your life over to the Lord, he will fight for you and He will prevail.

2 Timothy 1:2 May God the Father and Christ Jesus our Lord give you grace, mercy, and peace.

Genesis 32:28 “Your name will no longer be Jacob,” the man told him. “From now on you will be called Israel, because you have fought with God and with men and have won.”