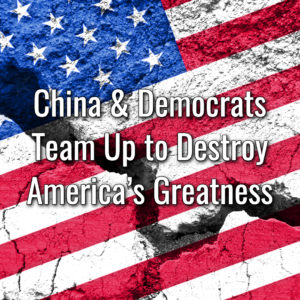 With the dust beginning to settle, things have become much clearer. Whether it was intentional or inadvertent, there is one thing that has become certain. The Chinese Communists have used the COVID-19 pandemic to try and destroy the economy of the USA and the other Western Democracies. Simultaneously, they have been profiteering from the contagion they have inflicted upon us. Adding insult to injury, the Democrats have done their level best to capitalize on our nation’s pain to further their Globalist, Socialist agenda. This has been a “Perfect Storm” of destruction.

Now, as we begin the arduous task of rebuilding, whether you are a supporter of President Trump or not, our collective goal must be to Make America Great Again. We simply cannot allow either the despicable Chinese Communists or their toddies, the American Democrats, to achieve a permanent victory over the land of the free and the home of the brave.

To get back to where we were, however, we will have to roll up our sleeves, gird our belts for work and be as single-minded as we were during World War II. What we have experienced, and continue to experience, has as many political pitfalls as it does medical. Make no mistake about it, neither the Chinese Communists nor the Democrats want us to come out of this on top. Both want America to fail, but we will not allow this to happen.

As has occurred throughout our illustrious history, we will rise to the occasion. Despite the inevitable whining of some, Americans are robust people. We always have been. Having faced crushing obstacles in the past, where we achieved overwhelmingly victory, we will do so once again.

The way to do this is to never again allow ourselves to be hostages to the Chinese, just because it’s cheaper to do so. They are not our friends, and they never will be our friends. Where the Democrats are concerned, their idea of American greatness is for us to piss away our wealth, which we can no longer afford to do. For the foreseeable future, we must work hard, work smart, and toil without ceasing to once again be the economic superpower Almighty God has destined to be.