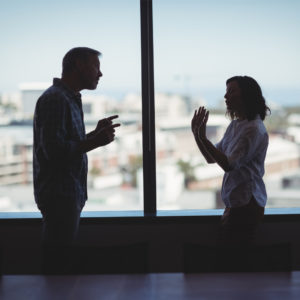 Schizo, short for schizophrenic, refers to people who have a long-term mental disorder that causes a sense of fragmentation in their mind.  Somewhere in their thoughts, emotions or behavior, there is a breakdown–a gap–which leads to faulty perceptions and inappropriate actions.

So what got me thinking about schizophrenia?  The gap that I see between what the Bible tells us is acceptable Christian behavior, and the behavior I actually see today–specifically as it relates to how we treat the people around us that do not think, sound, smell and look exactly like we do.  And, believe me, I’ve been tested in this area myself recently.  I mean, who doesn’t want everyone to be just like them? Right? Wrong.

The Message Bible speaks about people being different from one another in Romans 14:6-9 comparing those who choose to eat prime rib vs. those who are not carnivores:

“What’s important in all this is that if you keep a holy day, keep it for God’s sake; if you eat meat, eat it to the glory of God and thank God for prime rib; if you’re a vegetarian, eat vegetables to the glory of God and thank God for broccoli. None of us are permitted to insist on our own way in these matters. It’s God we are answerable to—all the way from life to death and everything in between—not each other. That’s why Jesus lived and died and then lived again: so that he could be our Master across the entire range of life and death, and free us from the petty tyrannies of each other.”

In other words, each person has the power of choice for THEIR own life. And if YOUR choice is different than mine…how am I supposed to re-act to you?  Read on in verses 10-12:

“So where does that leave you when you criticize a brother? And where does that leave you when you condescend to a sister? I’d say it leaves you looking pretty silly—or worse. Eventually, we’re all going to end up kneeling side by side in the place of judgment, facing God. Your critical and condescending ways aren’t going to improve your position there one bit. Read it for yourself in Scripture: ‘As I live and breathe,’ God says, every knee will bow before me: Every tongue will tell the honest truth that I and only I am God.’ So tend to your knitting. You’ve got your hands full just taking care of your own life before God.” (emphasis mine)

Tend to your own knitting!  If I want to knit a blue scarf with a chevron pattern, don’t hate me if you want a red scarf with polka dots! Now let’s bring that thought into real life.

I met someone a few months back.  A very articulate and seemingly knowledgeable person in the area of politics.  I was impressed. Yet recently I noticed this person made a social media post bashing the President–it was particularly unkind. At that moment, it was not about who I voted for or who I will support in the future, it was about someone having a voice in an area and using it in a manner I did not agree with. The post was strong enough that President Trump supporters were sure to feel a sting. I disagree with the choice to post, I disagree with the sentiment, but I won’t treat this person any differently. And I certainly will not enter into a political debate with them!

But here is how the thinking goes many times, (my thinking…certainly not yours!). I will just give her “the treatment” the next time I see her…I don’t really have the nerve to tell her why I’m upset, I’ll just make her uncomfortable enough with my snooty behavior to keep her wondering why I turned into the Ice Queen and that will be repayment enough. Sound familiar?

Likewise, I met someone about six years ago and liked her from the start. Over time our lives wove in and out of one another, but we recently re-connected. I noticed some bold social media posts supporting a topic I’m very against. Will I “dis” her the next time I see her? There was a time I would have. Actually, the church I was in many years ago would have encouraged it and leadership modeled it. But that was not Bible, that was Christian schizophrenia–professing to follow Jesus, yet acting like Judas. Read on, Romans 14:13 says:

“Forget about deciding what’s right for each other. Here’s what you need to be concerned about: that you don’t get in the way of someone else, making life more difficult than it already is.”

Wow, when we say we are Christians, but judge and show disdain for others who don’t act, live or believe just like we do, we are making their lives more difficult. AND we show them that elite, judgmental mentality that only serves to drive others further from God.  After all, people tend to think Christians are acting like Him since they are His representatives in the earth. Scary!

How can we praise God all the way to the grocery store with our Bethel music blaring in the car, yet we see a woman in the cereal aisle with a pro-choice t-shirt on and give her the stink eye? Jesus won people over to follow Him by His love and compassion–yet He never compromised. So to think we will win someone to Christ by giving them the evil eye is ridiculous. It’s schizo.

When we, as Christians, treat people with contempt, superiority or some other prideful demeanor, we are being schizophrenic.  By that I mean there is a gap between being Christ-like (as we should), yet treating others unkind because they are different than we are in their choices or lifestyles. I’m not saying I agree with wrong lifestyles, there are things that I am very against because the Word plainly lays it out, but I am not against the person. Have I been tempted to treat people differently at times?  Of course! But, listen, when it comes to judgement, if Jesus is your Lord you don’t have to worry about being on the receiving end, but you need to worry if you are on the side of giving it.

Pastor Rick Warren sums it up so well, “Our culture has accepted two huge lies. The first is that if you disagree with someone’s lifestyle, you must fear or hate them. The second is that to love someone means you agree with everything they believe or do. Both are nonsense. You don’t have to compromise convictions to be compassionate.”

Talk about a POWERFUL life lesson–check out this final thought from Micah 6:6-8:

How can I stand up before God and show proper respect to the high God?

Should I bring an armload of offerings topped off with yearling calves?

Would God be impressed with thousands of rams, with buckets and barrels of olive oil?

Would He be moved if I sacrificed my firstborn child, my precious baby, to cancel my sin?

But He’s already made it plain how to live, what to do, what God is looking for in men and women. It’s quite simple: Do what is fair and just to your neighbor, be compassionate and loyal in your love,

And don’t take yourself too seriously—take God seriously.