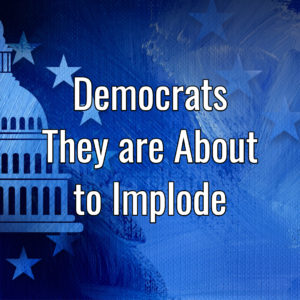 You’ve got to love the irony. The Democrats, the Party who assures us they are ready to lead our great nation, want to save us from the greatest economy America has ever had, save us from having reestablished the strongest military in our nation’s illustrious history, and save us from having the lowest unemployment rate in the past fifty years.

Bless their hearts, they want us to trust them to implement their nonsensical Socialist agenda without providing us with a clue about how they intend to pay for their grandiose programs. That the Green New Deal and other things don’t have a prayer of succeeding seems irrelevant to the Party of Curly, Larry, and Moe.

But who are the Democrats actually offering to lead us to their utopian nightmare? Their number one contender is an Independent who has never been a Democrat—not in his entire life. Their alternative to Crazy Bernie is a mega-billionaire who has been a Republican for many more years than President Trump has. So, a consummate capitalist, Mini-Mike, who pretends to be a Progressive intends to buy the nomination from the Party who vehemently hates billionaires.

You can’t make this stuff up. If the consequences of the fiasco the Democrats are cooking up wasn’t so disastrous for the American people, it would be quite comical, but what’s happening isn’t funny at all. These buffoonish Democrats are proposing programs that are certain to destroy our economy, certain to eviscerate our military superiority, and certain to take away jobs from millions of Americans, especially minorities. At this point, it seems highly doubtful that the party of confusion will even nominate a real Democrat. This brings me back to my original point. You’ve got to love the irony.