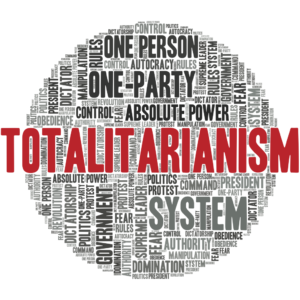 The goal of the Progressive, Neo-Marxist Democrats is “Totalitarianism of Thought.” Make no mistake about it, nothing less than complete capitulation to their belief system will be sufficient. What they desire isn’t just something they dream of obtaining, like winning the Lottery. It’s a firm, set-in-stone goal they intend to achieve, imposing their Weltanschauung upon every American, regardless of what is required to accomplish the task. The democracy they intend to create is one where freedom of thought and expression will not be tolerated—not by anyone other than one of the Progressive elitists.

If you understand what they want, if you realize this is what they intend to produce, which most Americans do not, then you can understand exactly why they are so apoplectic about the shellacking they are about to receive in the upcoming Midterm Elections. Overwhelming, crushing defeat wasn’t supposed to happen to them. Being soundly repudiated wasn’t in their plan. Because there is nothing the Democrats can do to prevent it, however, the rage they are now expressing is understandable, even predictable.

What we are about to do, repudiating them by voting them out, is actually how democracy is supposed to work, but it is definitely contradictory to their Neo-Marxist belief system. To them, our repudiation is so un-American that those of us who champion throwing them out are being called NAZIS.

Neo-Marxist politicians and members of the media love to call us names. We aren’t NAZIS, of course, but they are definitely saying we are. We used to be called racists for disagreeing with them but, since that charge has been used so often that it has lost its power, they have graduated to use an even more offensive charge.

Because we have learned to discern what they are doing, because we also know that it isn’t true, we no longer allow their diatribes to intimidate us. The blinders have been lifted from our eyes. We have learned exactly who these Progressive Neo-Marxist Democrats are. We know what they want—Totalitarianism of Thought—and we are unapologetic in our opposition to them imposing it upon us.

These Progressive Democrats are godless men and women who love the darkness rather than the light. They thrive in the darkness because their deeds are evil. Being evil, we have no common ground with them. Because we don’t, we oppose everything about them. We will not rest until we obliterate their destructive worldview, which has adversely influenced millions of Americans. We will fight them and prevail, beginning with a devastating repudiation of their candidates in the Midterm Elections in 2022.