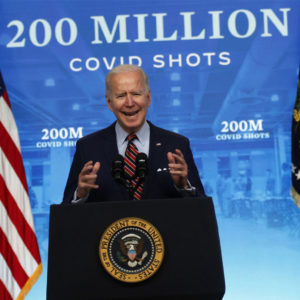 Leaving aside any medical benefits or detriments that might be involved with injecting the COVID-19 vaccine—a subject about which I’m not qualified to opine—let’s take a look at the legality of Biden’s announced policy of forced immunization. I am qualified to address that issue. The question is this: Even if Biden was a legitimate President rather than a fraudulent Usurper, would he have the Constitutional right, the legal authority, to require Americans to be vaccinated?

Equally as interesting, if this requirement was genuine and legitimately being enacted for the public good, rather than as a dictatorial step to break the will of the American people, wouldn’t the mandate be for everybody, without exception? This seems logical, doesn’t it? There wouldn’t be any group that is being excluded, but there is one, isn’t there? Nearly 700,000 Postal Workers have been exempted from Biden’s required vaccination. Why would that be?

In my opinion, it is their reward for their sinister role in the 2020 Presidential Election. If not, what other explanation, what other justification, could there be? That they have been excluded lets us know that what Biden is attempting to accomplish is based on political ends and not the safety of the American people. If it was based solely on safety, there wouldn’t be any group, especially such a large group, carved out for exemption. Others, including illegals, have also been carved out.

That Biden and those whispering in his ear want to increase their power and authority over the American people, using fear tactics to do so, should be obvious to everyone, but it isn’t. Millions believe Biden’s un-Constitutional pronouncement is for our own good but, even if this was his intent, what would give him the legal justification to abridge your inalienable right to life, liberty and the pursuit of happiness?

In my opinion, none. Team Biden has been short of legal justification and long on intimidation. The idea that Americans should be required to prove they’ve been vaccinated for a virus that has a 99% survival rate, before being allowed to shop for groceries and other necessary daily activities, is absurd. It’s also un-Constitutional.

In the USA, there are more than 800,000 registered sex offenders, but none of these deviants are required to carry a card, letting us know they are perverts. The reason why is because it would “violate their privacy.” Yet, Biden is telling us that there is no violation of privacy concerning being vaccinated for COVID-19. If the absurdity of these two contradictory positions doesn’t infuriate you, then you need to retake your high school civics class.

For these reasons and many others, whether or not you have already been vaccinated, it is my belief and conviction that every American should resist the un-Constitutional dictates of the Fool who is occupying the White House, but there are those who disagree. Many Americans support mandatory vaccinations. Instead of being angry with them, be patient. They just don’t have sense enough to pour piss out of a boot.