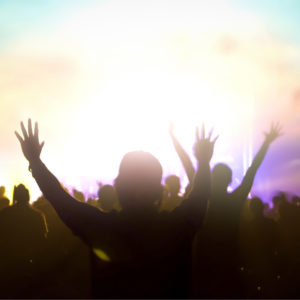 My grandmother Eleanor, (Cheri and I always called her Eleanor, not out of disrespect, but because that is what she told us to call her) was a powerfully effective woman of prayer.  She always spent a long time in prayer every evening.  She would get down on her knees beside her bed and pray into the late night hours.  Often when Cheri and I would have sleepovers with her, she would tuck us into bed, and then go to her knees.  We would wake up in the morning with her curled up next to us.  But I never saw her come to bed, because she prayed for everyone by name, until after we were fast asleep.

In her later years, she often prayed for people when they came to the front of the church for prayer.  She wasn’t a tall lady as a matter of fact; she got smaller as she aged, but she was big in her relationship with God.  There was a season in my dad’s church when a local drug and alcohol rehab center would allow their patients to go to his church.  Big towering men, who desperately needed prayer, would come to the alter, asking specifically for “grandma” to pray for them.  She was their favorite.

Prayer passed naturally from my grandmother to my dad.  He always had a prayer list with him wherever he went.  He had hundreds of people on his list, family members, ministry friends, missionaries, neighbors, sick people he knew, and those who were in trouble.  The ministry group we had been associated with had a long list of their pastors, and Daddy added all of them to his list.  He prayed for each person by name every day.  People who knew him, respected him, not because he had a handful of degrees, he didn’t, but because he had a relationship with God.  Sometimes when I watch my sister pray, I see my dad.  She has always been the quiet one of us two, but not in prayer.  She is a powerhouse.  Like our dad, I think prayer comes naturally to her.

Once when I was sick, and sleeping in the living room, daddy knelt by the couch, where I slept, and prayed for me all night.  Years later, after Fred and I were traveling throughout West Africa, our daughter Marie-Louise stood up on a bunk bed and the industrial ceiling fan smacked her on the head.  It was so loud that people heard it all though the building.  We took her to a clinic, but they had no way of knowing if she was ok or not.  She cried and cried for hours.  I remembered my dad sitting next to me and praying for me when I was sick, and so like him, I held her all night, praying that God would heal her and take away the pain.

My dad believed in reading the Word of God.  By the time he died, he had read his Bible through over four hundred times.  Mornings and late into the night, he would read and pray.  He wore out many Bibles by writing in them and highlighting special portions, and filled boxes and boxes with outlines for sermons.  He had a small Bible that fit in his shirt pocket, and it went with him everyplace he went.  Every spare minute was used to squeeze in a little more of God’s word.  He loved to read and studied revivals and history, but the Bible remained his favorite.  Most mornings, he would walk to McDonalds.  We often teased him and called McDonalds “his office.”  Local people knew he would be there, reading and drinking coffee.  If they needed someone to pray for them, or just someone to listen, he was there.  Even when he and I traveled, if we had an afternoon free, he would tell me at breakfast time, “let’s go check out the area, maybe there’s a shopping mall you can walk around and I can find a coffee shop to sit in.” From the USA and Canada, West Africa or the Philippines, that was his plan.  I have walked a lot of malls while he sat in “his office.”

Daddy watched little television, as a matter of fact he hated most things on TV.  But he had a few singing groups he liked to listen to, and he enjoyed reading books on American history.  Other than studying the Bible and prayer, my dad’s love was music.   He loved singing for the Lord, in church, nursing homes, front lawns, and coffeehouses.  He wrote hundreds and hundreds of poems, some he put to music.  Playing his guitar for hours every week, he worshiped the Lord.  I think he was more of a worshiper/musician than he was a pastor.  Oh, he loved the people that he pastored, and was very proud of the church where he had invested the most of his life, but worship was what he lived for.

My dad could play just about anything with strings on it.  He could also play a little of the piano, but the guitar was where he excelled.  When he was young, my grandparents sent him to a violin teacher.  After one lesson, the teacher sent a note home with my dad telling my grandparents that he had no musical ability and that lessons would be a waste of money.  He proved that man wrong.  He once told me that if you spend 10,000 hours playing an instrument, then you will master it.  I think he mastered his guitar several times over.

He spent hours writing songs or thinking about how to sing an old song or hymn differently.  Then he would come to church and sing something that was a bit familiar with added minor chords, a whole new rhythm, and many new verses.

One thing that could be said about my dad, was that he was a faithful giver.  He always had a little stash of money saved for a new guitar, but often before he found the perfect guitar he would hear of someone in need and give away his savings.  Living a life of service, he gave whatever he had whenever he saw a need, and never came home from a mission trip with any money left.  He would give everything away, including the guitars he traveled with.  I’ve lost count of the many guitars he left on the mission field.  He raised money for pastors who had lost their homes and money for Bibles to give to graduating Bible school students.  His heart was easily broken by the poverty he saw in other countries, and he always traveled with something to leave behind.

One time we were in the Philippines and he had brought with him a bag of guitar picks.  He probably ordered them online and bought them wholesale.  He passed them, along with guitar strings, to anyone who had a guitar.  At the end of that trip, we were in a church in Manila.  Daddy had about five or six guitar picks left.  While the band was tuning up, he walked up to the guitar player and handed him the left over picks.

The young man cried, “I needed a guitar pick and didn’t have the money to buy one.  I went to the market just yesterday, and looked at them, but I didn’t have any money.  Even this morning I prayed and asked God for a guitar pick.”  He held the picks in his hand and cried. So did my dad.

Daddy never had a lot of money and made all of his trips by faith, sometimes making monthly payments on a credit card.  It didn’t matter to my dad how much it cost to go, if God said go, then he went.  He often told us that the Gospel is nothing without the “Go” at the beginning of the word.  If he had an invitation, he believed the invitation was all the word from God he needed to make the trip.  I have found that I feel much the same way, and never need a word from God to “Go.”  I need a word from God to stay home.

This was a poem my dad wrote about faithfulness.

Once I had a dog of blue, Listen close the story is for you

When the sun went down, He’d lift his head

And let out a howl, That would raise the dead

Only one thing, He had on his mind

To get to the fields, A fresh track to find

And letting him out, At the edge of the wood

He’d get you one going, As quick as he could

Filling the night, With his beautiful bawl

To tree that coon, He’d give you his all

Tho tempted by deer, His path often crossed

The track of that coon, He never once lost

But kept pressing on, over river and dale

Undaunted by obstacles, He’d not give up the trail

Tho tired and weary, and his feet start to bleed

He’d keep pressing on, Till the coon he had treed

And if it took you till dawn, To get to the tree

When you finally arrived, There he would be

And none can deny, You may mark my word sir

He was a Sticker a Stayer

And an All Night Tree Barker

Now he didn’t know how, To shake your hand

Play with a ball, Or guard your land

Couldn’t drive the cows, Or pull a sled

And his pedigree at a dog show,

He had never heard read

But to that which he’d been born and trained

He’d gladly give his life, And never complain

Now wouldn’t it be great, If we all could be true

To that which we’ve been called,

Instead we think, We can do it all

From being a Bishop, To playing pro ball

And when we fail, And run a-muck

We console ourselves, And blame it on luck

But luck has nothing, To do with success

Failure is caused, By poor judgement and laziness

And temptation, Has caused many to fail

When they left the course,

In pursuit of some Quail

So make your calling, And election sure

Press onto the course, Without a trace of demure

Press on press on, Tho dark be the night

Press on press on, Till broad day light

And stay at the tree, Like my ol blue hound

For when the Master comes,

That’s the place to be found

Do what you do best, And try a little harder

That it may be said of you