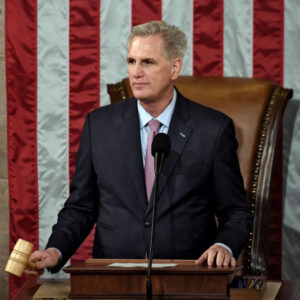 Nearly every Conservative I know is horrified that Rep. Kevin McCarthy has not been confirmed to be the next Speaker of the House of Representatives. I am not horrified. Here’s why:

Just before Christmas, the 2023 Omnibus Spending Bill was presented and passed in less than twenty-four hours. The bill authorized $1.7 trillion in spending. When placed on a table, it was so thick that it couldn’t even be bound together. Members of the House were told that if they didn’t authorize it immediately, without even having the opportunity to read it, they wouldn’t be able to adjourn for the Christmas recess.

This is NOT how the system is supposed to work. Laden with pork projects, no member of Congress was capable of reading the bill, not even significant sections of it. All of this was by design. Speaker Pelosi and her lieutenants planned for his scenario. It’s how they have driven our nation so badly into debt.

When Obama became President, our national debt was $11 trillion. Now, it is $31 trillion. This level of debt is unsustainable. Our indebtedness is nearly 1.5 times our GDP. This means we are in debt a year-and-a-half’s worth of all the work in the USA, and our debt is growing.

Our system is so compromised that members of the House cannot do the job they were elected to do. Unless checked at the beginning, once McCarthy becomes Speaker, he would be able to do the same thing Pelosi has done. For any Conservative, this is unacceptable. So, instead of joining those who are handwringing from embarrassment that no Speaker has been chosen, I choose to stand with those who demand that the process be fixed first. I suggest you do the same thing.