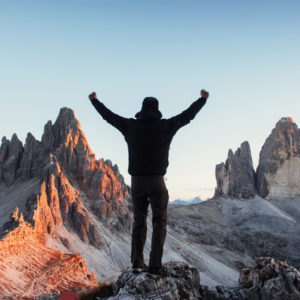 I saw the billowing rain clouds in the heavens, as they prepared to dump their contents upon the earth. They were black and grey, with sun rays glowing from behind. I heard rumbling and saw bolts of lightning as they grew in power. Soon they overcame the rays of sunlight, and the sky went dark. Everyone’s eyes were fixated on the clouds while fear gripped their hearts.

Then the rain began to fall, and the valleys began to fill while everything was twisted and uprooted in its path. Tumbling and tumbling, the remains of houses, cars, businesses, signboards, cows, and chickens succumbed to its power. It was as IF everything was lost.

From behind the clouds, something more significant was happening. That which they thought were the rumbles of the storm, were actually the sounds of heaven, resounding with power. Angelic armies were gathering, preparing for war. Their weapons were gleaming in the brilliance of the SON-rays as Jesus stood commanding his army.

I watched the scene unfold before my eyes, and I asked the Lord, “What battle are you preparing for? Is this the end of the world?”

He smiled at me and said, “Look! Do you see that one?” He pointed to a family huddled together while creatures of darkness surrounded them, “We don’t just gather for world consuming problems. We gather for this family and that family. The one here on my right and that one over there.”

As I turned, I saw Him gaze upon your family. I saw Him point to your broken heart. I saw Him look at your problems, your health, your children, and your finances. I saw Him nod in your direction, and when he did, heaven’s finest angelic soldiers screamed through the sky fixated on your situation.

Suddenly I saw the entire force in heaven focused on you and you and you. I saw the army of God touching your families, your sons, and your daughters. I saw them zero in on each one as if your battle was the only one that mattered in the whole world… As one united force, the warriors came kicking at the foundations of evil the devil had tried in vain to build around your home. No power could withstand the might that came racing from the sky. The weapons of hopelessness and fear were no match for the armies of God.

“You are standing on the precipice of the greatest outpouring of my Holy Spirit,” says the Lord. “Mountains will be brought low, and valleys will become high. The son that has been lost will be found. The daughter’s eyes will be opened. No longer will you weep. No longer will you cower in your homes. I am using the storms of the enemy to expose his purposes and plans. He is the one being uprooted and torn from his foundations. His anchors can not withstand the force of my power. His lies can no longer inflict blindness and paralysis. I am opening the windows of heaven over you, and I will prevail….”

“Do not be afraid, for I have ransomed you.

I have called you by name; you are mine.

When you go through deep waters,

I will be with you.

When you go through rivers of difficulty,

you will not drown.

When you walk through the fire of oppression,

you will not be burned up;

the flames will not consume you.

For I am the lord, your God,

the Holy One of Israel, your Savior.

You are honored, and I love you.

“Do not be afraid, for I am with you.

I will gather you and your children from east and west.

I will say to the north and south,

‘Bring my sons and daughters back to Israel

from the distant corners of the earth.

Bring all who claim me as their God,

for I have made them for my glory.

It was I who created them.’”

Bring out the people who have eyes but are blind,

who have ears but are deaf.

Gather the nations together!

…….But you are my witnesses, O Israel!” says the lord.

“You are my servant.

You have been chosen to know me, believe in me,

and understand that I alone am God.

There is no other God—

and there is no other Savior.

First I predicted your rescue,

then I saved you and proclaimed it to the world.

No foreign god has ever done this.

You are witnesses that I am the only God,”