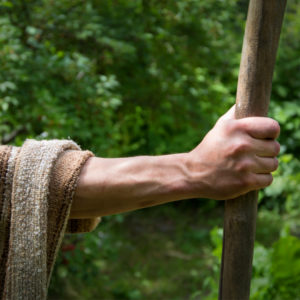 How long he had been in the old dried-up, well, he didn’t know.  It was only a few hours, but already it felt like a lifetime.  Joseph paced back and forth in the tiny space.  He tried to sit, but he was too fidgety. All he wanted was to get out, but the pit was too deep.  He tried yelling, but no one answered.  Were they all really that mean?  Didn’t they care for him at all?  He was their brother and yet he yelled until his voice gave out and no one responded.  They didn’t even come to check on him to see if he was all right.

He finally dropped to the ground.  The sun had been beating on him until he could feel little blisters on his forehead.  With no place to go, he put his head down on his knees, trying to protect his face from the sun.  Suddenly, when he thought it couldn’t get any worse, he heard a commotion at the top of the well.  Shielding his eyes, he looked up, only to see strangers peering down at him.  Who were they, he wondered?  It didn’t take long before the mystery was solved.  His brothers, sons of his father, had sold him.  His own family had traded him for money.  Not only that, but…before the traders took off with Joseph, one of his brothers yanked on the beautiful multicolored coat that his father had given him.  He felt it tear as his brother ripped it from his grasp.  “You won’t need that where you’re going.”  He said, and he walked away.

Joseph’s whole life turned upside down.  Deprived of enough water to drink and little food, he was broken, confused, and scared when he arrived in Egypt.   Everything was different.  He was a country boy.  City life was like nothing he had ever known.  No friends, no family.  Even the food was a mystery to him.  Besides that, he didn’t know the language.  The first few days were a nightmare. The favored son of wealthy herdsmen had become the least of all.  Stripped of everything, he was now a slave.  Little did the young man know that his life was following the course that would lead him straight to treasure.

He was sold to a government official named Potiphar and quickly adapted to life in Egypt.  He didn’t wallow in self-pity, but did his best to learn how to please his master.  Soon Potiphar saw leadership abilities in Joseph and quickly promoted him.  It wasn’t long before Joseph was in charge of the whole house.  He was doing his best in a difficult situation, unaware that he would soon lose everything again.

Potiphar had a beautiful wife who was used to getting her own way.  Day after day, she looked at her husband’s new slave.  She admired his foreign looks, the accent of his voice, his well tones arms.  There was something special about him that attracted her.  Ah yes, it was like the gods had smiled on him.  She couldn’t keep her eyes off from him until one day, when they were alone in the house, her passions could be ignored no longer.  She grabbed Joseph, pulling him to her bedroom.

Joseph struggled against her.  “Don’t do this.” he cried.  “Your husband trusts me.  I can’t do this to him.”

“Don’t worry about him,” she purred.  “This can be our little secret.  He doesn’t need to know.  Come.  Come to my bedroom.”

Her words felt like acid as they dripped from her mouth.  She would not be stopped until Joseph pushed her away and fled from her grasp.

It wasn’t until he reached his own room that he realized she had his coat. Trying to catch his breath, he dropped onto his bed and put his hands to his face.  “Now what do I do?” he wondered.  He knew things were about to get much worse for him.

Angry and humiliated, Potiphar’s wife started screaming and waving Joseph’s coat like a banner.  “Look!  Look! I have evidence against this Hebrew slave.  While everyone was gone, he came to my room and made advances towards me.  Look.  I have proof.  He even left his coat behind.”

Whether or not Potiphar believed his wife, he had no choice but to have Joseph sent to prison.   She was his wife, after all.   And yet, even in prison, our young hero was in the perfect will of God.

Gone were the niceties Joseph had enjoyed in Potiphar’s home.  He no longer had a bed to sleep on, and the food was terrible. That is, if you could call the slop, they were fed food.  The prison was little more than a hole in the ground with little light.  Rats and snakes lived there too and competed for their food.  However, this was more of a political prison than one for hardened criminals and so the food and liberties were a bit better than in other prisons.

Regardless of Jospeh’s location, the favor of God still rested upon him, and soon he was in charge of the whole prison.  Twelve, perhaps thirteen years passed, and the future looked to promise the same.  Was there any way out? Other prisoners came and went, and yet no one ever came looking for Joseph.  His father surely thought he was dead.  No one else cared.  He was all alone.  And yet God was with the young man. There was no doubt. He became well known for his honesty and hard work.  He even interpreted dreams for other prisoners.  “Remember me,” he would say to them as they were released.  “When you get out of here, remember me.”  But no one did.

Suddenly, one day Joseph heard people calling his name.  Who would look for me with such urgency he wondered.  Grabbed by muscular arms and practically carried out of the prison. They led him to the bathhouse, where others scrubbed on his skin and trimmed his hair.   Someone dumped some fragrant oils on his skin and rubbed them in.  New clothes and sandals were put on his feet.   What was going on he could not tell, nor in his wildest dreams could he imagine what the rest of the day held.

Several years passed.  Joseph had interpreted Pharaoh’s dreams and because of the wisdom God had given him, he became the most powerful men in the land, second only to Pharaoh.  Everything about Joseph changed, his appearance, his voice, his mannerisms, even his name.  He had not only the favor of God in his life but also the favor of man.  Everyone respected him.  He had no needs, as every wish of his was carried out.  People bowed before him when they entered a room and bowed as they left.  Joseph had, at his disposal, all the riches of Egypt.  He had a family, servants, employees, and guards.  What he didn’t have were his brothers and his dad.

Then suddenly, standing before him, were faces he had not seen since he was a teenager.  There was Reuben, Simeon, Levi, Judah, Issachar, Zebulun, Gad, Asher, Dan, and Naphtali all bowing before him, not knowing who he was.  Oh, but he knew them, that was for sure – he recognized them all.  Then with the forgiveness developed within him while he suffered, he brought them to Egypt, and cared for them.  He didn’t respond to them in the way they deserved, no he responded by sharing his treasure.

So you may ask, what treasures did Joseph find in his dark places?  His treasure had many layers.  He learned to hear God’s voice and found favor and peace with God and man.  He saved Egypt and many other nations from famine.  Without Joseph’s dark places, the entire nation of Israel would have died.  Without the treasure Joseph found, Jesus the Messiah would not have been born.  No one would know salvation.  There would be no redemption.  There would be no relationship with God for us today as we know it.

Yes, there was a reason Joseph suffered.  I imagine that a day never went by when he didn’t cry out to the Lord for his father.  Surely he had lonely and fearful nights, as he was only a child when he had been sold into slavery.  He had no comforts; no friends; no family; living alone in a faraway place with only his God.   He trusted God, much like David, who wrote in Psalm 31 that his life was in the hands of the Lord.

I have been forgotten like one who is dead; I have become like a broken vessel. For I hear the whispering of many — terror on every side! — as they scheme together against me, as they plot to take my life. But I trust in you, O LORD; I say, “You are my God.” My times are in your hand; rescue me from the hand of my enemies and from my persecutors! ESV

While you may never be forced to live in a prison, or faced with the troubles that Joseph faced, the treasure still awaits those who seek after it.  Joseph was ridiculed, bullied, lied about, rejected, sold, and forgotten by those he loved and trusted.  Perhaps like him you have been rejected by your family, or by choice you have moved far away and you struggle with loneliness.  Perhaps people have lied about you and you are in your own prison.  Not all prisons are the same, some are made of shame and others regret.  If you are lonely or feel ashamed, look for the treasure that God has hidden in your dark place.  There is a day coming when you will come out of your troubles, when you will understand why you have suffered.  But in the meantime, look for treasure.  Don’t leave your dark place without it.  Joseph came out and saved a nation.  He came out without revenge or casting blame.  And when his father died and his brothers were afraid of what Joseph might do to them for selling him, Joseph’s response was “What you intended for evil, God turned for good.  Don’t be afraid.  I will take care of you and your families.  You have nothing to fear.”   Take those words to heart, my friend.  What Satan has done to you was meant for evil, but God has turned those things into your treasures of dark places.

But Joseph said to them, “Do not fear, for am I in the place of God?  As for you, you meant evil against me, but God meant it for good, to bring it about that many people should be kept alive, as they are today.  So do not fear; I will provide for you and your little ones.” Thus he comforted them and spoke kindly to them. ESV