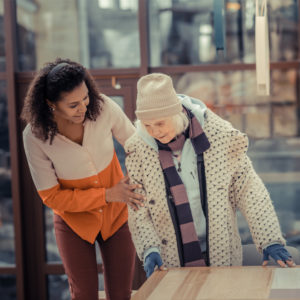 Today I was in a long line at a dollar store. Four customers in front of me was a 91 year old man. I heard him tell the cashier that he had just lost his wife and it was his first Christmas without her. He was buying a mop and a bucket–obviously taking on household responsibilities that had always been done for him. It took a moment or two longer to check out because he wanted his $3 in change to be all quarters. Who knows? Maybe he needed to go to the laundromat.

Both the customer waiting in front of me and behind me started complaining because he moved a little slower than most. Both were women in their 60’s, well dressed, salon hair, but rotten attitudes. One kept rolling her eyes saying, “What in the world is going on up there?” The other was swearing like a sailor. I turned to both of them and said, “Ladies, he is 91 years old. He’s trying. Let’s give him a break.” They nodded in agreement and backed down.

Then I went to the grocery store and the customer service person, looking very forlorn, told me the store was a nightmare. She said, “It’s crowded with rude, mean people that are acting like wild animals.”

So, this is a reminder to myself and anyone who reads this…can we PLEASE be kind? Can we please realize the world does not revolve around us? Being kind is not a feeling. It is a choice. There will be daily opportunities to be mean, but it is a weak person who consistently follows through with that option. Kindness takes strength of character. Jesus was firm, disciplined, focused…yet He was always kind.

Hey, if someone wants to cut you off in traffic, fine, let them go and smile. ​Would you rather let a reckless driver have his way or sit for two hours on the side of the road filing a police report over a fender bender.

If impatience gets the better of someone and they ditch you in line at the store…who cares…be thankful you are not that rude and pray for them that they will learn some manners. There was a day when you could correct someone publicly, but we no longer

live in that day–people have been killed for doing just that. Save your life, let it go. Your family will be glad you held your peace.

Every time you sow a seed of kindness, it will come back to you as a harvest. Every time you keep your integrity when someone lacks theirs, it strengthens your character. Every time you remain stable when everyone around you is unstable, your ability to succeed grows. May we all re-learn the lost art of kindness.