COMMON SENSE: Laura Bush, in your tweet about President Trump’s immigration stance, you stated; “this zero-tolerance policy is cruel. It is immoral. And it breaks my heart.”
While you are certainly entitled to your opinion, I would respectfully say that you are not entitled 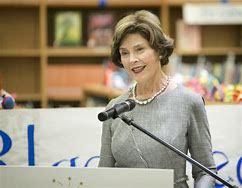 to take the moral high ground on this issue or on any other. After all, your husband’s administration did nothing substantive to help our immigration crisis.
You use the word immoral in your tweet, but you have never addressed the immorality of initiating a war in Iraq that cost our nation thousands of lives and trillions of dollars—all spent chasing after weapons of mass destruction that did not exist. You have also never been willing to address the fact that your husband is responsible for nearly half of our nation’s $20 trillion debt. In my estimation, placing the economic burden of your husband’s poor stewardship of our economy on the backs of Americans is what is cruel.
What breaks my heart is this: You never used your platform as a former First Lady to criticize anything Barack Obama did, but you have been more than willing to use it to undermine President Trump. In my opinion, given how poor your husband’s record was as President, you should not interject yourself into an issue your husband did nothing to solve.
Posted in Articles, Government