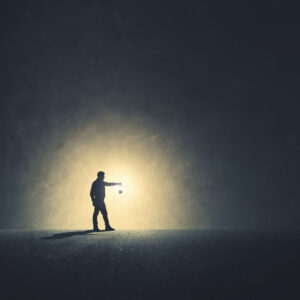 I had only been driving a few months when my dad told me to go to the store and pick up a few things.  My grandparents were visiting and my mom needed a few groceries.  It never occurred to me to check the gas gage (a problem I still have today), and on the way home the car ran out of gas.  I could get the car onto the shoulder of the road as it sputtered to a stop, and so I just rolled up the windows, locked the doors, leaned my seat back, closed my eyes, and waited.  I knew my dad would come looking for me.

Sure enough, it was.  They pulled my grandfather’s car up behind me and my dad walked over to the car and tapped on the window.  I must have been asleep, as his tap startled me.  I rolled down the window, and he said, “What are you doing?”

I said, “Waiting for you.  I knew you would come.”  And sure enough, he had.  Any time I needed him, he was always there, especially if he thought I might have to do something alone.  “You don’t want to do that alone.  I’ll go with you.”

Fred could not stay with me on my first night in the Roswell Cancer hospital, so my dad stayed that night in my hospital room with me.  I was thirty-eight years old, yet my daddy sat all night, with his hand on my foot, or holding my hand, praying for me.

Only a few months later, Fred and I flew to Vladivostok, Russia.  When we arrived, the pastor asked Fred to help him with some computer issues.  I knew this could take a long time, and it had been a long journey.  I was exhausted, and all I wanted to do was to go to bed.  We had been shown where we were to be staying at the Bible school, and I asked if I could be taken there so that I could sleep.  The pastor said yes, and took me out to the abandoned army camp where the Bible school and our bedroom were located, a few miles from town.  Both Fred and the pastor assured me it wouldn’t be long and the pastor would return with Fred.

I fell asleep quickly and woke up around 8pm.  Fred and the pastor hadn’t returned yet, so I went back to sleep.  I woke again about 10:30pm, midnight, and 2am.  Still no pastor and no Fred.  I didn’t have a phone, nor could I speak any Russian.  By 6am the students were all fixing breakfast and with various hand signals, they let me know I should join them.  At 8am, the students and I were assembled in one of the makeshift classrooms for the first class of the day, but no pastor, translator, and no Fred.  Finally, around 8:30, they showed up.

Fred was very upset and full of apologies.  He had fully expected to meet me at the Bible school, but when they got done with all the computer work, about midnight, the pastor informed him that all the streets were closed and it was forbidden to drive that time of night.  So Fred would have to wait until morning, while I was left to spend my first night in Russia alone.

While some people may have panicked.  I was in perfect peace.  Not even once was I afraid.  I learned years ago when I ran out of gas, when I had to go some place alone, when I was dealing with cancer that I was never really alone.  Daddy had always been there for me.  And that was how I felt my first night alone in Russia.  I knew my Heavenly Daddy would always be there for me, no matter where in the world I was.  Without even realizing it, I had drawn on the treasure I had found years ago on the side of the road.

Fred has done the same for our daughter, Marie-Louise.  Soon after we adopted her, there was a powerful rainstorm, and Fred jumped out of our bed.  I was startled and asked him what he was doing.

“It’s raining really hard right now and I know if it thunders with lightning, Marie-Louise will be afraid.”

Just as he got to her bedroom door, the lightning flashed bright preceded by a loud resounding boom.  Marie-Louise sat bolt upright screaming, “Daddy, where are you?”

His reply?  “I was here before you called.”  That is a treasure she has called on for years.

Before they call I will answer; while they are yet speaking I will hear.

It must have been that way for Samuel when he was just a scared little boy, left to stay with Eli, the priest.  I can’t imagine what it was like for him to be separated from his mom and dad at such a young age, and yet he learned to hear God’s voice and knew that his Abba (Daddy) Father was always with him, a treasure he found and drew strength from his entire life..

“We want a king.  We want to be like everyone else.”  Just the words were heartbreaking to Samuel.  He was always strong and seldom disrespected, but on that day he felt utter rejection, and shook inside from a broken heart.  For the first time in his life, I imagine he felt completely alone.  No one stood up for the beloved prophet that day.

“I have never cheated you or harmed you, or done anything but bless you, and now you want a king.  You don’t understand, the king will take your sons and send them to war.  I have never sent anyone to war.  He will require you to pay taxes, and make you his servants, something I have never done.  That’s what kings do.”  He might as well have been talking to a stone wall for all the good it did.  No one wanted to listen to the old prophet.  He felt shaken, beaten, and completely alone.  Except he wasn’t.  God was there.  He was Samuel’s treasure that day.

“Samuel, why are you feeling so bad about this king situation?” God asked.  “They haven’t rejected you, they rejected me!”

“Do everything they say to you,” the LORD replied, “for they are rejecting me, not you. They don’t want me to be their king any longer.” NlT

Can you imagine God being rejected?  Can you imagine how that must have felt to God?  And yet it was a lonely and solitary rejection that Jesus bore on the cross for you and me.

The night was dark, and the moon was hanging high in the sky, while his three friends leaned against a tree sound asleep.  As his friends slept through his lonely anguish, he could hear Peter snoring. He knew what he was about to do and saw the cross as he knelt there that night.  He saw the moment when the sky turned black and the earth shook.  Yes, he saw it all as he prayed that night, all alone.  You see, Jesus purchased treasures that night for you and for me.  He suffered and carried all the burdens alone, so you and I don’t have to.  Crying in the garden, he prayed alone.  He stood before Pilate alone, faced his accusers, was spit upon and ridiculed, alone.  Without a friend to plead his case, he suffered alone, so we would never be alone.

It must’ve been a bittersweet moment as he remembered the prayer that he taught his disciples to pray, “Our Father, who is in heaven, holy is your name.  Let your kingdom come, and your will be done in earth as it is in heaven.  Oh Father, if it is at all possible, deliver me from this situation.  Nevertheless, not as I choose, but as you will.  Let it be done here on earth as it has been done in heaven.  Oh Father, don’t let me fail and give into temptation, but give me the strength, my daily bread, to sustain me on this journey and not give in to evil.  Work out your merciful forgiveness and redemption in my life.  This is all for your eternal kingdom, your miraculous power, and the wonder of your glorious majesty.  Oh Father, holy holy is your name…”. Over and over he prayed, all alone, for you and for me.

“And he said to them, “When you pray, say: “Father, hallowed be your name. Your kingdom come. Give us each day our daily bread, and forgive us our sins, for we ourselves forgive everyone who is indebted to us. And lead us not into temptation.” ESV

“…thus therefore pray ye: ‘Our Father who art in the heavens! hallowed be Thy name.

‘Thy reign come: Thy will come to pass, as in heaven also on the earth.

‘Our appointed bread give us to-day.

‘And forgive us our debts, as also we forgive our debtors.

‘And mayest Thou not lead us to temptation, but deliver us from the evil, because Thine is the reign, and the power, and the glory — to the ages. Amen.” YLT

I don’t think there is anything more difficult to live with than the feeling of being rejected, and not wanted, alone.  Of course, that is exactly how Jesus felt as he hung on the cross.  During one of his agonizing breaths he cried out, “My God, my God, why have you forsaken me,”  He knew when he went to the cross that he would carry the sin of the world on his body, and that the Holy Father could not look on him when that happened.  But that didn’t change the fact that Jesus, the Son of God and the Son of man, felt the anguish of being alone.

And about the ninth hour Jesus cried out with a loud voice, saying, “Eli, Eli, lema sabachthani?” that is, “My God, my God, why have you forsaken me?”ESV

Jesus suffered in the garden of Gethsemane.  In agony, he sweat drops of blood as he prayed the night before his crucifixion.  Then the Bible says he went to the dark places of hell to break the stronghold of death, so that he could purchase our treasured redemption.   He came, having left everything behind, having left all of heaven and its glory, he entered this world of sin and death alone.   He willingly went through dark places and suffered alone, in order to receive the treasure that he freely gives to you and me.

Who in the days of his flesh, having offered up prayers and supplications with strong crying and tears unto him that was able to save him from death, and having been heard for his godly fear,

though he was a Son, yet learned obedience by the things which he suffered;

and having been made perfect, he became unto all them that obey him the author of eternal salvation… ASV

Dear friend, if you feel alone, you have a Heavenly Father who is always with you.  Just like my dad, he is holding your hand and staying close, comforting you in your troubles.  You are never alone.  Jesus paid the ultimate price for the wonderful treasure of God’s presence.  He suffered alone, so you don’t have.