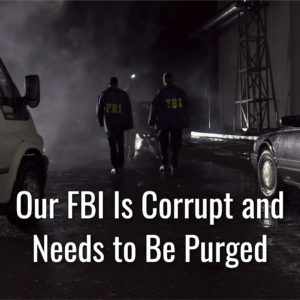 I am tired of being shocked, angered and appalled by the illegal and unethical activities of the FBI. I am also weary of hearing that 99 percent of the FBI are wonderful, hard-working honest public servants. I don’t believe it. If they are as wonderful as the Conservative media would have us believe, they would have been eager to expose the blatant corruption that was obvious with Comey, McCabe, Strzok, Page, Priestep and many others, but the FBI hasn’t been forthcoming, have they? No, they haven’t—quite the contrary.

Beginning with the appointment of Christopher Wray to head the Bureau, which was as poor a selection as naming Jeff Sessions to be the Attorney General, virtually nothing the FBI has done during Trump’s Presidency has been forthcoming or transparent. Why President Trump continues to praise Wray is a mystery to me. The Director has gone out of his way to hide evidence and shield the criminals who used their authority to destroy people like General Michael Flynn.

With what little is left of the President’s first term, he needs to purge the FBI from top to bottom. The criminals from the Comey regime, including Comey himself, need to be held to account. They need to be indicted, prosecuted and, if found guilty, sent to prison. This should have already happened, but it hasn’t, has it? So far, nobody has been held to account, which is an unacceptably poor performance.

Enough is enough. President Trump needs to admit he made a mistake in appointing Wray, just like he did in appointing Rex Tillerson. Then, Trump needs to fire the Director of the FBI. There is no excuse for Wray’s piss-poor performance, and I am tired of making apologies for him.

With Wray at the helm, the FBI will never get back on track. I’m no longer confident that this is even Wray’s goal. If a nation’s secret police is corrupt, which the FBI definitely is, the health of our republic is in serious jeopardy. Changes need to be made, and they need to be made immediately.