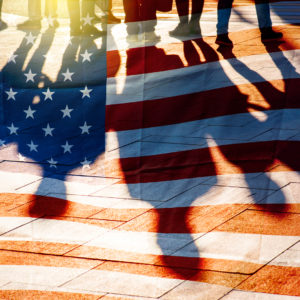 Many of us realize how important we must be in providing God’s light to our nation. An equally large number of Christians don’t want anything to do with politics or any responsibility as a citizen. Instead, they want to isolate themselves from all involvement in the cultural arena, other than to participate in what is absolutely necessary like filing taxes. Many reason that they don’t want to be stained by the world. Their attitude is, why polish brass on a sinking ship?

Despite the earnestness of this belief, whether they like it or not, they have a role to play. As we have already learned, we are witnesses to the Lord, regardless of what we do. Our only choice is whether to be a good witness or to be less than a good witness. This includes our role as being a citizen of the United States of America. Being an American is part of our core identity.
By and large, we understand the role God plays in our lives as individuals. That’s a given. We comprehend this aspect of our personal walk quite well. In fact, it’s our daily focus nearly all of the time. Additionally, most of us have a pretty good idea about how we are supposed to function in the Body of Christ, but there is more to being a Christian than being self-focused.
As a child of God, out of the depth of our being, out of our renewed minds and purified hearts, we also have a duty to be good citizens. This means we must take a stand for Christ in our nation. We have no other option, not if we want to remain true to our calling. We must be light to our fellow Americans and salt to our cultural values.
Because our nation has strayed from its original purpose, which has been happening for the past half-century or more, we have ceased to be the “City on a hill” for the world to emulate. Having forgotten our foundational purpose, like the ancient Israelites, we have moved away from many of God’s blessings. We are now wandering aimlessly.
This is why being a patriotic Christian citizen is so important. As Christians, we take the Constitution seriously. We understand that it is the foundation upon which our democracy stands. Additionally, the Rule of law is fundamental to who we are as a people. Nobody is above the law, or at least nobody is supposed to be above it. For nearly all of us, these beliefs are deeply held convictions.
Posted in Articles, Government