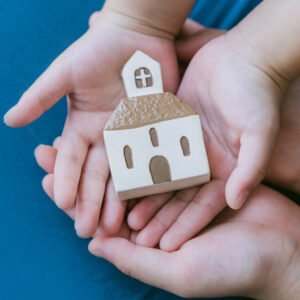 I attended a baby dedication a few weeks ago.  It was a lovely day where friends and family gathered round praying a blessing on the newborn.  Mom, dad, and siblings listened as their pastor (who happened to also be grandpa to the newborn)  read from the book of 2 Timothy.  How delighted I was that I could be a part of such a special time.  I had attended many baby dedications, but this one was special to me.  This child, along with her brother and sisters, is the third generation of this ministry family.  The grandpa found the Lord when I was but a teenager and he soon entered the ministry, becoming a pastor.  His children all grew up in church and are serving the Lord.  His daughter and her husband moved to Africa as missionaries, raising their young family in their ministry home.

Some of the most amazing people I know have grown up in a home where their mom, dad, or both worked in full-time ministry.  For me it was an exciting way to live, but I know it wasn’t for everyone.  There are many stories of pastor’s kids who are the biggest troublemakers in the church, and of missionary children who have walked away from the Lord, but that wasn’t my experience.  Yes, we went through seasons where my best clothes were hand-me-downs, and food was in short supply but there were also exciting days, as I watched my mom and dad live by faith, instilling in me a desire to live that life for myself.

Unfortunately, there are many who didn’t have my experience and because of that, they don’t live in the blessing of this powerful covenant blessing.  Many have adopted destructive behaviors, and live lonely lives feeling like they don’t belong anywhere.  I know one man who has lived his whole life, separated from any church family, fearful of his future.  Watching his mom struggle as a pastor’s wife, not having the money to buy nice things, and having to scrimp and save just for food to eat, planted seeds of fear in him.  He is still a believer in Jesus as his Lord, but his memories keep him from moving on.  He is a hoarder, stashing up everything from food to clothes, fearful that he might suffer again as he did growing up.  Another man, originally attempted to enter his own ministry, following his dad, when suddenly he rejected everything he had grown up believing, and has become a drunkard, eventually losing his wife, because of his wild life choices.  The churches his dad pastored were a bit on the legalistic side, emphasizing what a Christian can and can’t do until this man had had enough.  He also claims to love Jesus, but he is stuck in the past, reacting to the things he was taught as a child.  Another woman broken because of fights and unforgiveness, has turned her back on the Lord living for the next drinking party.

I attended a well known Bible school forty-seven years ago.  It has been known as a school for people who desired to go into Christian ministry.  Yet many who attended with me no longer work in ministry, and some have totally walked away from the Lord.  What shocks me the most are the ones who grew up in ministry homes.  I see their Facebook pages and cringe when I see the things they post and pictures of the things they do.  I can’t speak for each of them, but I have talked to a few and they share the same stories.  “Church people treated my mom and dad badly.  My family suffered, and no one cared or reached out.  I live under grace now, and the teachings I grew up with were wrong and legalistic.”  So instead of working to fix the situation they hated, they carry their offenses, almost like a badge of honor, walking away from relationships, leaving their heritage behind.

Not all ministry parents are perfect. That is something I would be wrong to not address. I know of those who were strict, so strict that if you wiggled in church, you would get a scolding when you got home.  I knew one pastor’s wife who could make you feel you were bleeding after one of her tongue lashings.  And there are those who sacrificed their families for the sake of their ministry, neglecting the most precious of all, their own children.  While it is true, these things have happened and yes, some children have been abused in other unspeakable ways, you will find the families divided.  Some who continued with their Christian walk and others who turned away.

I know many of these people personally, as some are a part of my family, children of my own friends, or the children of my dad’s friends.  All grew up as ministry kids.  Some parents were pastors, some did missionary work, some worked for big Christian ministries.  I ask myself, “How did we all grow up in the same family, or in similar situations, and all turn out so differently?”  As I ponder this question, I see each of those lives affected by emotional wounds, deeply hidden inside of their soul.  Many then swallow a bitter pill of offense that keeps them from living the life of victory they so desire. Because of this, everything they see in life is tainted through the eyes of offense.  Soon everything connected with Christianity becomes a reminder of things stolen from them.  While they may never verbalize it, ministry reminds them of the toys or sneakers they could not have, because mom and dad couldn’t afford them, or the absence of their mom or dad because someone in the church needed them.  They not only view ministry as a sacrifice that they are no longer willing to pay, but they view the Christian life as a farce or a social club full of hypocrisy.

The stronghold that the enemy has over PKs isn’t new.  After Abraham, Isaac, and Jacob, there are few stories in the Bible of second generation leaders who they themselves grew into powerful leaders, preachers, prophets and kings.  There is nothing good mentioned about the children of Elisha, Eli, and Moses.  King Saul’s son Johnathan survived the madness of his father only to die because of his father’s insane jealousy.   David’s son Solomon was a good man, but he didn’t have the heart his father had.  There is no mention of children who followed the apostles; however, there must have been some.  Obviously the devil spends a lot of time breaking the power of a generational inheritance, build upon the shoulders of those who have gone on before us.

So what can we do for these wonderful people trapped in this destructive mindset?  Chances are they will not read this article, and so we must be the ones who pray them back.  We must be the ones who look out for the next generation of PKs growing up in our churches.  We need to help them realize the significance of a life lived in generational-covenant relationship.  Without our love and prayers, and without the Holy Spirit showing them how to walk in forgiveness and true grace, they will follow the same road many other PKs have walked.

The apostle Paul said it well when he spoke to Timothy in 2Timothy 1:3-7.  Paul said he was following his ancestors, and he instructed Timothy to follow his as well, mentioning Timothy’s mom and grandmother.  Not only that, but he was told to fan into flame the gifts he had received by the laying on of hands.  Paul doesn’t say who laid hands on Timothy, but reading between the lines, I believe it was him mom and grandmother, leaders in the early church who laid their hands on their precious boy, imparting to him the power to lead the church into the next generation.  May we all be like these remarkable women, laying our hands on the next generation.  May we, as leaders, raise the next generation to become leaders themselves, who can stand tall on our shoulders.  And let us not forget those who without God’s grace and mercy are lost, having tasted of freedom and walked away.

I thank God whom I serve, as did my ancestors, with a clear conscience, as I remember you constantly in my prayers night and day. 4As I remember your tears, I long to see you, that I may be filled with joy.  I am reminded of your sincere faith, a faith that dwelt first in your grandmother Lois and your mother Eunice and now, I am sure, dwells in you as well.  For this reason I remind you to fan into flame the gift of God, which is in you through the laying on of my hands, 7 for God gave us a spirit not of fear but of power and love and self-control. ESV

For it is impossible, in the case of those who have once been enlightened, who have tasted the heavenly gift, and have shared in the Holy Spirit, and have tasted the goodness of the word of God and the powers of the age to come,  and then have fallen away, to restore them again to repentance, since they are crucifying once again the Son of God to their own harm and holding him up to contempt.