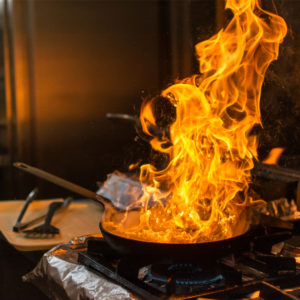 Yesterday was not my best cooking day.  It all started when my daughter Marie-Louise wanted me to fry some plantains for her.  I hate deep-frying, but I said I would do it for her. I was in a hurry, mistake #1…never fry in a hurry, so I poured the oil in a smaller-than-usual saucepan and dumped in the plantains, mistake #2.  The oil sloshed over the pot, and flames licked up the side of my pan. This wouldn’t be so bad if I had a gas stove, but no, I have an electric stove, and you are not supposed to have flames coming from the coil. So I reached into my cupboard to get my baking soda.

I grabbed the first white powder I saw in my cupboard and dumped several cups of corn starch onto my fire….then I put a big lid over the fire and waited for it to stop….how was I supposed to know that corn starch burns. As soon as I picked up the lid, I saw that the fire was burning along quite nicely, that is, if you wanted to roast hot dogs. Since I don’t like grilled hotdogs, I went in search of my baking soda and dumped almost a whole box on the fire. Replacing the lid, I decided that I would put the pan on another burner. I turned on the back burner, forgetting the fact that I had lost several pieces of macaroni under that coil.  I case any of you have a need to know, macaroni will also burst into flames when under a pot of oil. I still had some baking soda left, and so I dumped the rest on that burner and covered it with my now blackened lid.  I didn’t get uptight, nor did I freak out. I just went from fire to fire, while my niece sat watching my comedy of errors. Clean up was interesting…so much for cooking those plantains in a hurry.

I have pondered over this for the last several hours, and I got to thinking about how we often spend our lives putting out fires. Going from problem to problem, we try to put out the flames only to have them burst out again and again. We pour out some prayer, douse the situation with some quick praise and worship, and then to our surprise, the fire just comes back.

My cooking fire was not the fault of the plantains or even the oil. No, it was my fault. I was in a hurry. I didn’t use the right size pan. I hadn’t cleaned out my drip pan under the electric coil. That’s right, the fault was all mine. Nothing would have happened if I had slowed down long enough to do the job right.

Our life is much the same. We get so busy that we don’t spend time meditating on God’s word. We don’t take the time to clean out the old gunk lurking in our hearts after the last spiritual attack we tackled.  Weary and stressed, we go from day to day, wondering why the fire follows us.

One time while on a mission trip, I was shopping with my daughter, Marie-Louise.  The person arranging my schedule had just changed all the plans without telling me. To say the least, I was miffed. Marie-Louise and I had a great day when all of a sudden, I snapped at her for wanting to buy another shirt. “You don’t need another shirt…you have spent enough money already!” My irritation and biting remarks caused a look of confusion on her face. After all, it was her money, and she had earned all of it just for this shopping trip. Why did I care? Then I realized, I was mad because of the change of schedule not because of Marie-Louise. I quickly apologized.  Then I made a conscious decision to forgive the person changing my plans. I had to ask God to do a work in my heart. I had to take the time to do it right! It wasn’t my daughter’s fault, it wasn’t even the fault of the friend who had changed my schedule. My anger was my fault, and I needed to do some quick house/heart cleaning. I don’t know if you have noticed this or not, but in life, these little fires pop up when least expected.