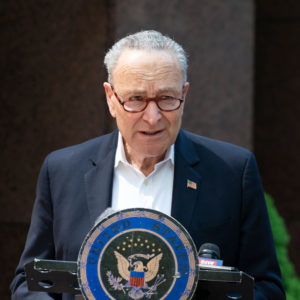 When I watch Senator Schumer or any of the other Democrats on TV crying foul about President Trump’s intention to fill the vacancy on the Supreme Court left by Ruth Bader Ginsburg’s death, I simply marvel at their audacity and cheekiness. After the despicable and disgraceful way in which they treated Judge Kavanaugh’s confirmation, for them to even utter a word about civility and decorum is preposterous, but this is exactly what they are doing.

Senator Schumer (D-NY) said, “By all rights, by every modicum of decency and honor, Leader McConnell and the Republican Senate majority have no right to fill it, no right.” What utter nonsense. Of course, the Senate Republicans have a right to fill the vacancy. They have the Constitutional responsibility to fill it. What Schumer doesn’t have the right to do is speak about “decency and honor,” not after the character assassination of Kavanaugh, or of Robert Bork, Clarence Thomas or Samuel Alito either. All of these fine men were subjected to incivility and dishonor at the hands of the Democrats in the Senate. Destroying the reputation of their opponents is one of the arrows in the quiver of Democrats. They do it repeatedly.

The Democrats have brought this situation entirely on themselves. Had RBG retired ten years ago, when she should have due to her declining health, Obama would have appointed a Liberal to take her place, but RBG didn’t do that, did she? No, instead she refused to go quietly into the night, but that’s not all she did. She allegedly told her granddaughter her last wish was for someone other than President Trump to appoint her successor. So, from the grave, she continues to try to do what she should have done gracefully a decade earlier, but it isn’t going to work—not this time.

Elections have consequences, and exercising appointments to the Supreme Court is one of them. It’s Trump’s duty and responsibility to appoint a judge of his choosing. Since the Republicans control the Senate, it is their responsibility and duty to advise and consent to his nomination. That the Democrats are threatening to “pack the Court” if they flip the Senate tells you one thing. It would be unwise, even Constitutionally destructive, to vote for any Democrat running for the Senate. It’s as simple as that.