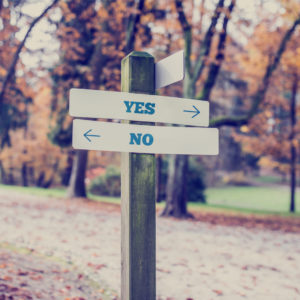 A movie was playing at the local theater and my daughter, April, asked three girls from work if they’d like to go. Two said yes, but Celine said no–without giving any reason. April told me it initially had the sting of rejection, but later she respected Celine for being so candid.

Celine had been studying for a promotion at work, had put in a lot of hours that week and was battling issues in her private life. Knowing this helped April not take the declined offer so personally. As April got to know Celine better, she realized that Celine was a “what you see is what you get” type of person. If she didn’t want to do something, was tired, or had other things going on, she simply said ​no​ without further explanation. She also had the ability to walk away and not feel one bit guilty.

The truth is, when we are put on the spot and asked to go somewhere or do something, we tend to avoid hurting others’ feelings by making up phony excuses when we can’t oblige. Then to make our “no” not sound quite so terrible, we try to justify reasons to the point we start sounding more ridiculous by the minute–eventually caving in with a reluctant, “yes”. Ever been there? You sit through a wedding shower for someone you barely know, a movie you would never choose to watch on your own, or a piano recital of your cousin’s husband’s child from his first marriage.

You might say, “What’s the big deal with just saying, yes?” ​Here is the big deal: Every time you say “yes” to one thing, you are saying “no” to something else.

Think about a time when you were pressured into doing something and were miserable, wishing the entire time you would have had the backbone to say no. It’s in moments like those that your mind becomes flooded with all the things you could be doing, should be doing, would be doing if you had just said, NO. The stark reality is, you can never get that time back. You can’t hit the rewind button or demand a do-over.

The only thing worse than not knowing what you are called to do in life is knowing what to do, but never finding the time to pursue it.

I had bowed out of the last three baby showers at work, so when invitation number four came, I felt I had no choice but to accept. I knew I was on the verge of being labeled antisocial. But the truth is, I protect my free time like a junkyard dog. Feeling pressured, against my better judgement, I accepted.

The event came on the heels of a busy work week and the thought of curling up in bed with a long neglected book was so much more appealing, but my affirmative r.s.v.p. had locked me in. And I soon discovered that my one yes set off a string of other “yeses”. Not only did I have to rush to attend on time, but I needed to bring food I had no time to prepare. It forced a stop at the grocery store where I wandered the aisles desperately trying to find something store bought that I could pass off as homemade. And because it was a baby shower, it warranted a gift for someone I barely knew.

If I had said no, that would have been it and I would have owned my evening. But that one yes led to yes, yes, yes and yes. Matthew 5:37 says, “​But let your ‘Yes’ be ‘Yes,’ and your ‘No,’ ‘No.’ For whatever is more than these is from the evil one.” Unfortunately, I hadn’t heeded that Biblical advice and my night was feeling more evil by the minute.

Now, is it wrong to go to a baby shower? Of course not! It’s great to bless a new mother with gifts for her little one. But I could have given her a gift, and even donated the food, without relinquishing several hours of my time that I needed for other things.

Now here is where things really get interesting. After rushing to show up to the shower on time, I found that almost everyone else was late–like, really late. Even the expectant mother was late. And those who had spear-headed the event–the ones I was concerned would ostracize me if I didn’t show up–they wished everyone a great night only 10 minutes after the event started. ​They had a prior commitment and ducked out before the potato salad was uncovered! At that moment I wanted to yell, “Hey, I changed my mind. NO! I don’t want to attend.” But it was too late.

In Patricia Lindsay’s book, “Be Happy: 170 Ways to Transform Your Day”, one of the ways she suggests is to:

“Say No. No sounds so simple, but many people find it almost impossible to say. They lack confidence. They fear giving offense. But when you know it’s right–when you know you will regret it when you don’t say it–have courage. Say no. Other options will arise. Others will

respect you.” It ends with this quote: “Which part of ‘no’ don’t you understand?” ~ Anonymous

Wow! You will regret it when you don’t say it! How many times have you regretted your ability to simply say no? *​Raises both hands!*

And I get it, you are probably a really nice person, so “no” is not routinely part of your vocabulary. But, it should be. There are times when you should, must, ought to–say no. Let’s look at a few.

5. The mission for your life is going to be detoured, derailed or delayed. ​“Build your own dreams, or someone else will hire you to build theirs.” It’s a popular motivational saying and very true. The way you get someone to break their focus on their own goals is to dangle another goal in front of them. Leaders from all walks are constantly scanning the masses looking for top shelf people to involve in their agendas. And when they find one, they dangle all sorts of carrots. There are times when it is right and ordained to join forces with others. But when you wake up in the morning, it’s YOUR to-do list that you should focus on first and foremost. If your nights are spent collapsing into bed after a 16-hour day, realizing you didn’t accomplish a single task related to your own vision…the answer should be NO!

No is a powerful word. It is a one word sentence. Screaming no has thwarted would-be attackers and abusive spouses. No shouted by a parent has stopped many a child from running into a busy street to retrieve a ball. It has the potential to save a life and save a dream.

We must stop feeling guilty for wanting to be focused, productive, successful and fulfilled. There is a paramount Scripture found in Jeremiah 29:11 (AMPC), “​For I know the thoughts and plans that I have for you, says the Lord, thoughts and plans for welfare ​and​ peace and not for evil, to give you hope in your final outcome.”

If you are going to say yes to the plans God has for YOU, you need to learn to say no to lesser things. ​No. Non. Nee, Nyet, Nein. ​Be brave, just say no.