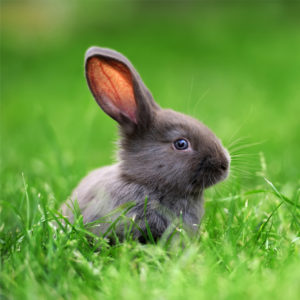 Like Solomon, I was engrossed in the moment of what my eyes beheld, as I searched for the life lesson in the creation realities that unfolded before me.

Recently, this adorable tiny baby rabbit the size of my palm was sitting alone and leaning against the air conditioning unit outside our home.  He appeared to be in a very tranquil state of being, which only added to his adorableness.  Unbeknownst to this little guy, that a couple feet behind him peeking its head out from a gap in the foundation of the house, was a serious threat looming in the form of a snake.

Then several feet before him, actually lay his promise land, a place of provision and prosperity.  I had provided carrots for him that were the size of the grapes of biblical Canaan.  Often times, don’t we find this scenario paralleling our own journey in life?  Well in harms way, yet oblivious of the peril that lurks nearby and often times just as unconscious of the blessings before us.

Fortunately, this darling rabbit did not even suspect nor experience such evil that day.  Sadly enough, neither did he taste of the provision that had been generously and thoughtfully laid out before him.  If we could see all the harm that we actually miss, because of the goodness of  The Compassionate One, would we possibly change our perspective?  Would we embrace more gratitude instead of grumbling?

So often, not only is God fully aware of the hostility that we face in our environments and the adverse  circumstances.  He is also, this unseen gracious force orchestrating blessings and lying them in our paths to be discovered and enjoyed.   But how often, we miss his blessings as well.  We are blinded from the knowledge of the evil that we escaped while also escaping the blessings that were intended.

Often times, more than one set of eyes can not only offer a fresh perspective but serve as an extra layer of protection.  Peter Bunny Rabbit appeared to have lost his family, his tribe, and was facing life all alone in this gigantic world and universe.

The enemy of our souls will usually seek out the loners, the introverted, the outcast, the rejected, the confused, the shamed and the lost, the disconnected, the straggler, the preoccupied and the distracted.  Generally speaking he won’t usually seek and pursue those in tight community and in close connection.  A pack of wolves and a tribe of lions know all too well, the power of the pack.  There’s power in numbers.  It is always safer to travel the road of life with someone else.  Even if it comes down to merely the Creator Himself.  You don’t gotta do life alone.  And you shouldn’t.

The very next day when I happened to see Peter Bunny Rabbit again, this sweet little thing, was so jumpy and simply terrorized by life itself.  I wondered to myself, what had this little creature experienced in such a short time, that had traumatized him and turned his calm to such caution and vigilance?  Possibly Peter’s fear of the unknown was shaking his world.  Has the unknown ever shaken your world?  I know it has mine.

I prayed a simple prayer that day that his suffering would end sooner than later.  Sadly, a few days later Peter Bunny Rabbit evolved into the ecosystem as this nasty Hawk snatched him away right before my very eyes.

Sometimes, we can pray “Your will be done Lord”, and had we been more specific and outrageous in our prayers, what an absolute different outcome may have evolved.  But in other cases, oftentimes, that is the best prayer that can be prayed in a situation.  In the case of this precious Peter Bunny Rabbit, it hurt me to see him hurt as I powerlessly stood by and observed his anxious ways.  As people of faith and strong believers in the power of prayer, it takes great spiritual discernment to know when to hold them and to know when to fold them. Ecclesiastes reminds us that there is a time for everything.  “A time for birth and another for death, a time to  plant and another to reap, a time to rip out and another to mend, a time to hold on and another to let go.”  With that in mind, should we not be regularly asking ourselves, “What time is it?”

At Peter Bunny Rabbit’s departure, I sadly asked God, “Why couldn’t He have created the animal kingdom to be just vegetarians?  Why all this blood, sweat and tears?”  In my heart of hearts, I know I heard,