COMMON SENSE: For a year-and-a-half, I have been writing about the Deep State’s obsession with removing President Trump from office. I have posted about it at least 100 times, including how the FBI’s

leadership has conspired with the Department of Justice to use the fraudulent Steele Dossier to spy on the Trump campaign and the Trump Presidency illegally.
Many people believed what I, along with others, have had to write, but an equal number or more have considered my hypothesis to be the rantings of a rightwing extremist. Some have considered me to be worse than that, but now nobody is laughing.
Anybody who pays the least bit of attention knows there is a Deep State conspiracy, but it’s not because of anything I have written about it. It’s because one of their own, probably Andy McCabe, who has provided hard evidence that there has been an ongoing attempted soft coupe. It is real and not the figment of my imagination. 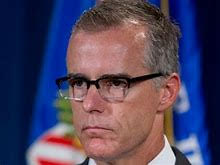 McCabe, or one of his loyalists, has done this by leaking classified information to the New York Times that has become headline news across America. In a meeting of top FBI and DOJ officials, shortly before the Mueller investigation began, newly-appointed Deputy Director of the DOJ, Rod Rosenstein, was being intimidated by acting FBI Director McCabe to try and have the 25th Amendment used to force Trump out of office in the spring of 2017.
Perhaps in an attempt to push back, Rosenstein yelled something like this. “What do you want me to do, wear a f**king wire?” This leak from the meeting, which verifies that there was a secret gathering between the FBI and the DOJ to try and use the 25th Amendment to have Trump removed from office, verifies that there has been an ongoing effort to invalidate the 2016 Presidential Election by removing President Trump from office.
What will come from this though? Rosenstein will have to leave, but that’s not what is important. What is important is the Deep State operatives have overplayed their hand by admitting there has been a movement by bureaucrats to destroy Trump’s Presidency.
This attempt is now out in the open for all to see, even the most obtuse Progressive. It’s real, and I have been right about this all along. Now, I can prove it.
Posted in Articles, Government