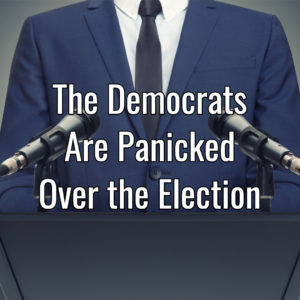 They say that a predatory animal can smell fear on its prey. In the 2020 Presidential Election, it seems fair to say that one can smell panic on the Democrats. With each scheme they have hatched to unseat President Trump, beginning with Russian collusion, which ended with Mueller finding no evidence to support the cabal’s assertion, all the way to the ill-fated Impeachment trial over a telephone call, President Trump has proven to be the Road Runner. Playing their part, the Democrats have been the buffoons, just like Wiley Coyote.

Trump has won each attempt to be unseated while the Democrats have suffered one self-inflicted wound after the other. Nothing has worked for them, but their Trump Derangement Syndrome is so intense that they will continue to self-destruct, thinking that this time their effort will work.

Now, with just eight months left before the next election, Crazy Bernie’s momentum is about to propel the Democrats off of the cliff. Seeing what’s happening, the establishment Democrats have changed the rules to stop Bernie, just like they did last time. They want to cut Bernie off at the knees while still trying to keep his Radical Leftist base in their camp. That’s not going to happen.

In their desperation to nominate a candidate who can beat Trump, the Democrats are now turning to Mini-Mike Bloomberg—a man who has been a Republican much longer than Donald Trump has been. It’s beautiful to watch what is happening. To make himself more acceptable, Mini-Mike has even floated the idea of having Hillary be his Vice Presidential running mate. Since that would put her one heartbeat away from her prize, Mini-Mike had better have a good insurance policy and never take a walk alone in a park.