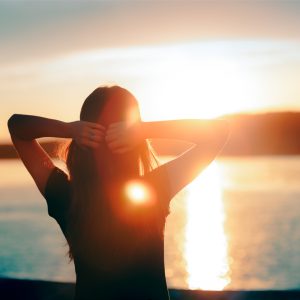 Jake always loved sleeping under the stars.  He would prop himself up against a tree for as long as he could, counting them in the sky.  Sometimes he would see a shooting star, or maybe even two.  He often wondered what it would be like to ride one as it raced across the heavens.  Finally he would wrap his himself up in a blanket and rest his head on a stone until his eyes closed and he would dream of faraway places.

One particular night, as he slept, he dreamed of an angelic highway where angels as big as could be, rushed to the earth and back to heaven again.  Up and down they traveled, each time bringing heaven a little closer to earth.  As Jake stared at the scene before him, the thundering voice of God spoke.

“I am the Lord,” he said.  “I am the God of your father and of your grandfather.  The promises I made to them, I make to you.  This land you are sleeping on, I have given to you.  Your descendants will multiply as far as your eyes can see and even beyond.  I will bless you without measure.  I will keep you and never leave you.  Truly I am with you, and I will remain until I have fulfilled all I have promised.”

As soon as the voice stopped speaking, Jake awoke from his sleep.  Startled at what he had seen, he said, “The Lord is here.  The Lord is in this very place and I didn’t even know it.  Wow!”

This story of Jacob comes after Jacob had stolen his brother’s blessing.  Jacob was a thief, a master of deception.  To think that God would speak to such a man was truly amazing.  And yet that is exactly what God did.  Almighty God spoke to the man who would one day become Israel, the father of a nation, the one who had fought with God and won his blessing.

Have you ever dreamed a dream that seemed so real that when you woke up, you were startled because it wasn’t real? It was only a dream?  I think Jacob thought about that night for the rest of his life.  It affected him so much, that even today, we know what he saw and how he felt.  He told it to his children and his grandchildren and perhaps his great grandchildren.  That one night’s dream under the sky lived on for generations to come and fathered a nation – Israel.

That glorious covenant nation struggled for thousands of years.  Sometimes they walked with God and other times fell so far from their relationship with God that the curses of broken covenants left them unrecognizable.  Yet they survived.  Tyrant after tyrant tried to snuff them out, and yet they remain.  The promises for Israel have not diminished through the years.  No!  They have only become more sure, as God never breaks his covenants.

The United States, too, was built upon dreams. They were dreams that foretold of a better life, of freedoms like that of worship, and of free speech.  One by one the dreamers came together to build a republic where all people could come together with equality, not fearing a monarch or dictator, but believing in a future where all men were created and treated equally.  It hasn’t been perfect. We have had our problems, but the dream still lives.  If the dreamers of old could see us now, they would be both awed and ashamed of what we have done with their dreams. Yet, I don’t believe any of them would curse us and call down judgement.  No, they would take us to the places where they had their dreams.  We would go to Plymouth, Philadelphia, Concord, Saratoga, or Jamestown to name a few.  They would remind us of the many who died for this great nation.  They would whisper to us all, “Don’t give up. Dream the dream again. Never forget the dream.”

Yes, we have struggled, and we have failed.  We have walked away from our covenants and the resulting curse has brought judgement upon our nation.  There is violence in our streets and we are almost unrecognizable.  Yet God does not break his covenants or his promises.  He is calling us to repentance so that we may once again walk in his blessings.  As He said through the prophet Amos in chapter 9, verses 11-12, “I will raise up those in my house.  Where they have fallen and been broken, I will rebuild and repair them.  They will inherit what I have promised.   They will be called by my name.”

Let this be our prayer, “Oh God, do as you promised.  Let these words of Amos be so for the United States of America.  Forgive us for our failures.  Open our hearts and reveal the truth, and give us peace in our streets.  Make us a nation that honors your name.  Lord, your promises for this great nation have not diminished through the years.  No!  They have only become more sure.  Because even though we have failed and broken faith, you oh God, never break your covenants.”

“In that day I will raise up the booth of David that is fallen and repair its breaches, and raise up its ruins and rebuild it as in the days of old,  that they may possess the remnant of Edom and all the nations who are called by my name,” declares the LORD who does this. ESV

Jacob left Beersheba and went toward Haran.  And he came to a certain place and stayed there that night, because the sun had set. Taking one of the stones of the place, he put it under his head and lay down in that place to sleep.  And he dreamed, and behold, there was a ladder set up on the earth, and the top of it reached to heaven. And behold, the angels of God were ascending and descending on it!  And behold, the LORD stood above it and said, “I am the LORD, the God of Abraham your father and the God of Isaac. The land on which you lie I will give to you and to your offspring.  Your offspring shall be like the dust of the earth, and you shall spread abroad to the west and to the east and to the north and to the south, and in you and your offspring shall all the families of the earth be blessed.  Behold, I am with you and will keep you wherever you go, and will bring you back to this land. For I will not leave you until I have done what I have promised you.”  Then Jacob awoke from his sleep and said, “Surely the LORD is in this place, and I did not know it.”  And he was afraid and said, “How awesome is this place! This is none other than the house of God, and this is the gate of heaven.”