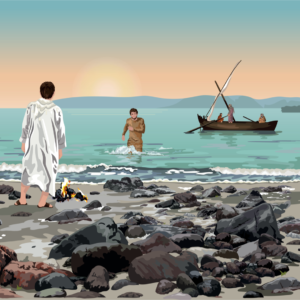 It was dark and the fires of dinner time had died to a glowing smolder.  Peter had just arrived that afternoon and no one wanted to leave.   A young man in the back stood and said, “Peter, tell us again about the fish.”  He’d told the story the last time he had visited, but it seemed like no one ever tired of the story.  Everyone gathered closer to Peter, pushing their way to get as close to him as they could.  The entire group nodded in agreement and said, “yes Peter.  Tell us again.  Please.  We want to hear it again.”

Peter pretended to be annoyed, but he loved to tell the story.  It would never get old to him. “Ok. Ok,” he said, as he settled down under a fig tree.  “It was a day like today without a cloud in the sky.  My brothers and I had been fishing all night and were cleaning the nets when Jesus saw us.  The crowd was enormous, oh my yes… such a crowd it was.  Jesus finished teaching, but everyone was pushing and pushing to get as close as they could to Jesus.  And then he saw my boat.  I couldn’t believe it.  He sloshed across the waves on the beach, climbing right up into my boat.  I yelled at him.  You know – I would not let just any stranger hop into my boat, but his eyes stopped me right in my tracks.

Then he spoke, “Push the boat back out into the water and throw out your nets.  You’re going to pull in the catch of your life.”  His words seemed to melt away any hostility I had against him.

I felt compelled to do as he said, even though I had been out in the boat all night.  It was one of the worst nights ever.  I hadn’t gotten even one small fish and here was this stranger, who didn’t look at all like he had any fishing experience, telling me to go out again.  I was so tired.  All I wanted to do was go home, have a nice breakfast of lentils and goat with my wife, and sleep, but I couldn’t say no to that man.

I jumped back into the boat and out we went.  I threw out my nets and suddenly they were filled with fish, big fish, little fish, all kinds of fish.  My nets were breaking, and I called out to my brother to come with his boat to help me.  We filled both boats so full that we almost sank before we made shore.

I knew right away that this man was no ordinary man.  I fell to my knees and told him to go away.  I wasn’t a good man, and just his presence made me ashamed.  But then he looked at me again with those piercing eyes.  “Don’t be afraid.  Follow me.  Today your life changes.  Once you were a fisher gathering fish from the sea but from this day forward, you will fish for men”

I traveled with Jesus from that day on.  Oh, what a time we had.  I could hardly believe that Jesus would choose me.  I wasn’t anyone special, but he told me to follow him, and so I did.  For three years we traveled around from place to place while Jesus taught about the Kingdom of God.  I didn’t always understand what he was teaching, but I believed what he said.  For the first time in my life, I felt like I had a purpose.  I was sure that Jesus would lead a great revolt against Rome and take over Israel.  I wanted to be there when he did.

Then when Jesus died, I was so discouraged.  I should have known, from everything Jesus had taught, that he would not remain dead but would come back to life, but I didn’t.  I felt like all was lost and I was a complete failure.  Then three days later the impossible happened.  Jesus rose from the dead.  He was alive.  After that, He would often come to us, teaching us about his kingdom.

One day after he had been gone awhile, I was feeling a bit stir crazy and said I was going fishing.  There were seven of us and everyone said they wanted to go too.  However, it was a bad idea because we weren’t catching any fish.  Then we saw a man walking across the beach. He called out to us, asking if we had caught any fish.  We said no, thinking nothing of it.  But then the man said to throw our nets to the other side.  We did, and the nets became so full of fish that they threatened to break.  It was then we realized it was Jesus standing there on the beach.  I was so excited I jumped into the water and swam as fast as I could to see him.  Later he and I were talking, and he said the same words to me as he had the first time I met him.  “Follow me.”  I remembered the day he had told me I would fish for men, but on this day he went one step further, “Take care of my sheep.”  He wasn’t talking about sheep any more than he was talking about fish.  He was talking about people.  “Fish for people, Peter.  Feed my people, Peter.  Care for my followers.”  The day seemed to pass quickly, and he was gone.  I had a job to do, but for the first time in my life I felt inadequate for the job.  How does one go from fisher to shepherd and not just any shepherd but one who shepherds people?

Then something wonderful happened.  Jesus told us to wait for the Holy Spirit, so a bunch of us were all together praying.  Suddenly the Holy Spirit came upon us in power and we were all changed and filled with his presence.  We went outside, everyone worshiping God and speaking in different languages.  There was a crowd of people all wondering what had happened, and suddenly I heard Jesus whisper to my heart.  “Throw out your net, Peter.  Today you fish for men.”  Somehow by God’s grace I caught over 3000 men that day.  They all believed and were baptized.  I knew then that this was just the beginning!  Peter sighed a deep contented sigh, smiled as he closed his eyes and said to himself, “This story never gets old.”

Once when he was standing on the shore of Lake Gennesaret, the crowd was pushing in on him to better hear the Word of God.

He noticed two boats tied up. The fishermen had just left them and were out scrubbing their nets.

He climbed into the boat that was Simon’s and asked him to put out a little from the shore. Sitting there, using the boat for a pulpit, he taught the crowd.

When he finished teaching, he said to Simon, “Push out into deep water and let your nets out for a catch.”

Simon said, “Master, we’ve been fishing hard all night and haven’t caught even a minnow. But if you say so, I’ll let out the nets.”

It was no sooner said than done— a huge haul of fish, straining the nets past capacity.

They waved to their partners in the other boat to come help them. They filled both boats, nearly swamping them with the catch.

Simon Peter, when he saw it, fell to his knees before Jesus. “Master, leave. I’m a sinner and can’t handle this holiness. Leave me to myself.”

When they pulled in that catch of fish, awe overwhelmed Simon and everyone with him.

It was the same with James and John, Zebedee’s sons, coworkers with Simon.

Jesus said to Simon, “There is nothing to fear. From now on you’ll be fishing for men and women.” They pulled their boats up on the beach, left them, nets and all, and followed him. Message Version

And he said unto them, Cast the net on the right side of the ship, and ye shall find. They cast therefore, and now they were not able to draw it for the multitude of fishes.

Therefore that disciple whom Jesus loved saith unto Peter, It is the Lord. Now when Simon Peter heard that it was the Lord, he girt his fisher’s coat unto him, (for he was naked,) and did cast himself into the sea…

Jesus saith unto them, Bring of the fish which ye have now caught.

Simon Peter went up, and drew the net to land full of great fishes, an hundred and fifty and three: and for all there were so many, yet was not the net broken…

That day about three thousand took him at his word, were baptized and were signed up.

They committed themselves to the teaching of the apostles, the life together, the common meal, and the prayers. Message Version