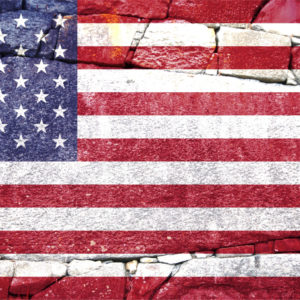 There is a Scripture that says, “Without a vision, the people perish.” This can also mean, “The people are unrestrained.” In America, I believe the second interpretation is the most accurate. We have become an unrestrained people. We champion wrong, calling it right, while legislating Evil and calling it Good. Millions do what is right in his or her eyes—all at the expense of our nation’s soul.

Those who speak out against the New Morality of the Radical Left, which is nothing more than the old immorality, are vilified, shouted down, and called “racists.” Because of this, few are willing speak out in opposition to what has become politically correct. To maintain the traditional values of earlier generations is no longer viewed as archaic. Instead, it has become a hostile, un-American worldview. Those of us who adhere to its tenets have been marginalized as citizens.

Refusing to confront Evil headlong, we have brought the destruction of our nation’s soul upon ourselves. We have foolishly believed there would be no negative outcomes for our behavior, but this has proven to be unwise and untrue. There are numerous consequences and none of them are positive.

Since the health of a nation is based on the collective character of its inhabitants, it seems clear that the United States is in trouble. By embracing Evil and calling it good, just and desirable, how long do you believe we can continue to sustain ourselves like this?

No external threat is as serious as what we are doing to ourselves. We are decaying at our core—all because we lack vision and have abandoned righteousness. Despite our claims to the contrary, the heart and soul of America has become flawed. Fools from the Left as well as Deep State bureaucrats are leading us. Corruption abounds. It has become so commonplace that there isn’t even much of an attempt to hide it. It’s being championed—exalted as being noble and good.

Being desensitized, we have come to expect political graft and fraud to be par for the course. We believe nearly all of our political leaders behave the same way. Shrugging our collective shoulders, we say, “This is just the way things are, and they are not going to change.”

Being inundated by that which is ignoble, we do nearly anything we can to escape our feelings of despondency. What has happened is this: Being told our vision is flawed and always has been flawed, millions have come to loathe what once made us great. Consequently, a corporate malaise has swept our nation. In our discouragement and despair, more Americans than ever have chosen to self-medicate their pain with alcohol, pills, weed and other forms of personal vice.

If I’m accurate about the nature of our national situation, and I am, how do we correct what’s happening? The answer is simple but implementing the cure certainly is not. We must return to the ways of our forefathers, including their beliefs, which were noble and high-minded. If we do, then millions will regain their noble vision and sense of purpose. They will still have to do the difficult work of recovering from a deeply flawed worldview—nonsensical Progressivism—but at least they can have hope, real hope and a robust national purpose.