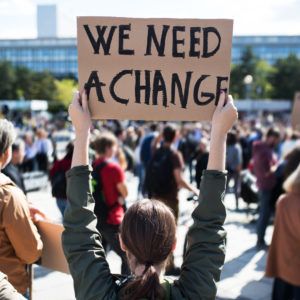 For years, to intimidate God-fearing average Americans like you and me, the Progressive Left has called us racists. Being horrified that we would be described in this way, many of us have demurred, backing down from what we believe to prove that this charge isn’t accurate.

Being a Conservative Christian, the last thing I want is to be identified as a racist. None of us want this. Nevertheless, whenever we put up a fight against any the outlandish proposals of the Progressives, the charge of being a racist is levied against us. According to their “Critical Race Theory,” no matter what we say or do, we are by nature racists. They monotonously repeat this charge to demoralize us. In the past, it has worked but, since it’s fundamentally untrue, its impact on us has waned.

Now, what they call us seems more like the incessant carping of a bitter ex-spouse than anything else. Sensing this, the Progressives have upped the ante. They are not just calling us racists any more. We have now become white supremacists. With the upset of Terry McAuliffe in the Virginia Governor’s race, the leftwing media has been repeating this charge incessantly ever since the election, hoping to put us in our place, but it hasn’t worked.

The reason it hasn’t is simple. We are definitely not white supremacists, and we know that we are not. The charge is ludicrous. Most of us have never even met anybody who is a white supremacist and, if we did, we would be very uncomfortable around them. I certainly have never met one, and I’ve been a politically Conservative Christian for more than half a century.

The Progressives have overplayed their hand but, by doing so, they have actually done us a favor. Just as the bitter retorts of an ex-spouse lose their sting over time, the same thing has happened with the monotonously repeated nonsense of the Progressive Left. We no longer “give a you-know-what” about what they call us. We’ve heard it all before and none of it is true. Because it isn’t, we have become better prepared than ever to stand our ground, to stand for the truth, to stand for the American way of life, and to stand for biblical values. We intend to do this regardless of what they call us. We intend to retake the USA from them, So, let them continue with their ridiculous carping. Bring it on! We’re ready.