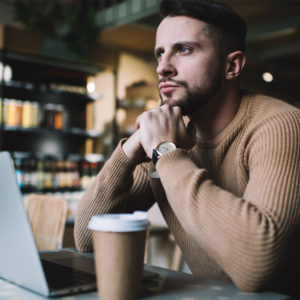 I walked up to the sign-in table of the Children’s Ministry at the mega church I attended–three young children in tow. You had to get your kids signed in early on Sunday morning or the classes might be full. Happy that I was ahead of schedule, I smiled at the woman overseeing registrations and cheerily said, “Good morning!” She shot me a piercing glance, did not respond, and walked away. My initial thought was, “What did ​I​ do?” Then I wanted to smack her. Then I went back to beating myself up wondering what I did to cause her reaction.

This obvious brush-off ate at my emotions all morning to the point I could not enjoy the service–my mind going through endless internal conversations. After all, we were in church. A mega church! We were on television! Weren’t we supposed to be nice to each other? I didn’t even know this woman. What could I have possibly done to cause her to respond the way she did? How could I have offended her before we even interacted? I was driving myself crazy second guessing what I must have done that was so bad.

But, a few days later I heard an on-time sermon that jerked the Second Guessing Syndrome right out of me. The message went like this: If someone rejects you, disrespects you, ignores you… ask yourself, what happened the last time you interacted with this person? Did you say something offensive? Did the two of you quarrel or disagree? Did anything happen that requires an apology? If the answer is clearly, yes–then make it right. If the answer is, no, walk away and don’t feel one bit guilty about it, because the problem is not with you. THE PROBLEM IS WITH THEM.

Wow! Really? You mean, “I” might not have done anything wrong? The problem may have been the other person and I had nothing to do with their inappropriate behavior? Yes. Really.

Oh my! I purchased a copy of the message and listened to it again and again. If someone rejects you, disrespects you, ignores you, or treats you poorly in any way, the problem may be solely with them and you had nothing to do with their bad behavior.

After hearing this I had the opportunity to put it into practice. Just as my two oldest children were about to begin another school year, I felt led to homeschool them. When I called their principal and explained why I would not be re-enrolling them, she was cold, without emotion and she ended the call abruptly. It was at that moment that I wanted to second guess my decision to homeschool. I felt like I should call her back and apologize and tell her I changed my mind. Or, wait, maybe I didn’t explain myself enough–let me give it another try. I started manifesting every symptom of the Second Guessing Syndrome.

But then I remembered… if someone rejects you, disrespects you, ignores you… ask yourself if you did or said anything offensive. If the answer is, no, walk away, or in this case hang up the phone–and don’t feel one bit guilty.

That is what I did: I went on with my day, making plans to tackle this new season of life. Later that night at church I ran headlong into Karen, the principal, and tried to hide from her, but it was too late. She approached me with a purposeful look so I braced myself for something negative. Instead, she looked me intently in the eyes and said, “I would never advise anyone to homeschool their children, unless I knew for certain they heard from God. I believe you’ve heard from God.” She even offered to help me with the curriculum. What a relief! I was so thankful that I did not fritter my day away feeling bad and second guessing myself because of Karen’s initial reaction. Responding with my newfound knowledge allowed me to respect myself and I believe it gained Karen’s respect too. We became good friends afterward.

It was then that I had an epiphany. Maybe when Karen and I spoke earlier she had just received a bad report about a family member. Maybe she had a flat tire on the way to work that morning and was still stressed out over it. Or maybe she just needed time to process what I told her. But deciding to hang up that phone and not second guess myself allowed me to go about my day without a myriad of internal conversations and cloudy judgment. It caused me to hold firm in my conviction to homeschool. Resisting the Second Guessing Syndrome was a really good mental health choice.

Oh, and remember the woman who blatantly ignored me at the children’s ministry table? I found out later that was how she treated everyone–an obvious character flaw that had nothing to do with me personally.

Many years have come and gone and there have been countless interactions with people who have reacted less than stellar toward me. I’m sure you can name a few yourself! But here is what we must remember: what happened the last time you saw this person? Was there a problem? Is the attitude you experience now carry-over from your last interaction? Is an apology in order? Is it something you need to discuss and work through? If so, do it. Clear the slate.

But if someone rejects you, disrespects you, ignores you–and there is no unfinished business between the two of you–it was all good the last time you spoke with them–you need to understand that the problem is not you, it’s them.

When the religious leaders came against Jesus, he didn’t spend countless hours psychoanalyzing himself and wondering if he had done the right thing by preaching a strong Gospel, eating with sinners, saving a woman from being stoned, setting a madman free and healing the sick. Jesus had the mind of Christ–a mind anointed by the Holy Spirit. And guess what? Your mind is

anointed by the Holy Spirit also. I like to call it “saved brains”–your brain is saved from the insecure, topsy-turvy thinking that the world tries to impose on you. 1 Corinthians 2:16 says it this way, “​But we do possess the mind of the Anointed One.” (The Voice)

Receiving the anointed knowledge about not second guessing myself has become a powerful weapon that allows me, like Jesus, to set my face like a flint and carry out the will of Heaven without the need for man’s approval. Won’t you join me?