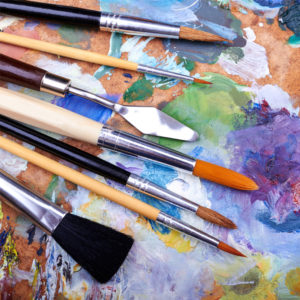 “He who loses the arts loses the culture,” wrote Francis Schaeffer. Art carries within it the worldview of the artist. It often communicates in the form of a story or through imagery. Both formats draw upon the senses in a way that circumvents our resistance to the worldview being communicated.

When the predominate worldview is Christian, Christian thought is shaping the culture. But when the art is not Christian in content, a foreign worldview is making its mark on culture. What we are going for is not Christian art, but art that is developed from a Christian worldview. It expresses beauty, goodness, and truth in excellence. It is not always message centric. It does not speak only when it communicates a message of salvation. It communicates when it illustrates beauty, family, life, glimpses of heaven, or the glory of God revealed in creative excellence.

Art may look like a beautifully hand-crafted dining room table. It may be a quilt, a scarf, or a deliciously designed cupcake. It may be a commercial on television or a radio broadcast. It may be a film or an album. It could be a novel or even a comic book.

We err when we reduce what is good art to that which is akin to a Christian tract. A film made by Christians is different than a Christian film. The former will show the glory of God within the art whereas the latter usually seeks to demonstrate God’s glory based on the impact of the message on the audience. When art is exemplary God is glorified. Good art taps into the majesty and creativity of the Creator. It awakens the heart to reflect on the beauty of creation.

During the time William Wilberforce worked to end the slave trade, a craftsman named Josiah Wedgewood design women’s jewelry with a symbol of freedom for the cause of ending slavery. The Abolition Movement also had posters placed around the city with the same symbol. This began to communicate a counter-cultural worldview that opposed the slave trade through visual art.

Within the seven mountains, art and entertainment are a cultural influencing force. Like the other mountains, the goal is not to control the mountain, but to disciple it. To do so, we need to go into Hollywood, Broadway, and Nashville among other artistic cities of the world. We cannot resign ourselves to subculture Christian art, as we have a calling to mainstream art that is enjoyed throughout the world.

Serving in this mountain can take any number of forms from direct artistic work to indirect work serving artists. One may be serving as an artist: actor, playwright, screenwriter, makeup artist, costume designer, set designer, writer, painter, weaver, sculpture, song writer, musician, graphic designer, jeweler, etc. For indirect influence in the arts one may be the administrative assistant, proofreader, housekeeper, pastor, mentor, counselor, or financier serving within the arts and entertainment mountain.

If this is the mountain of culture where God has called you, ask Him where your position is in this mountain and begin to pray for an invitation into that position. Meanwhile prepare for your calling. Educate yourself. Get around like minded people. Find others who have a similar calling and collaborate on how you can best be of service to the art world in your city or nation. Learn all you can about your calling to prepare for your contribution to the creative arts mountain. Look for the invitations of the Lord as you step from bread crumb to bread crumb into your position. He will make your path straight.