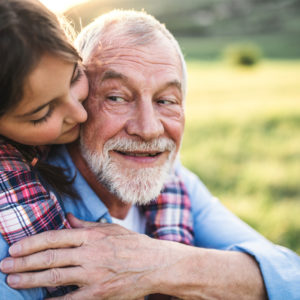 “Rise and shine for the glory of the Lord has risen upon you.” Those were the words that my sister and I woke up to as our dad, Charles Wesley Elwell, would throw open our bedroom door and flick on the lights.  Daddy was serious about serving Jesus.  But it hadn’t always been that way.  When he was a young man, he played Country and Western music, along with his best friend Rod.  They had their own radio show and were very popular, especially calling square dances.  He had grown up in the Free Methodist church and at some point, his pastor told my dad that he would have to choose between his guitar or the church.  He chose his guitar.  Daddy met my mom, Ada Mae, at a square dance and soon they were married.  My grandfather used to tell me that my dad could have had any girl he wanted, but he got the prettiest china doll he could find and married her.  He was only eighteen and she seventeen.  I was born a year later, the next year my sister Cheri, and five years later my brother Thom.

When I was about a year old, my dad’s aunt Evie and uncle Maynard would pick me up Sunday mornings and take me to church.  As soon as Cheri turned a year old, they took her too.  We were just babies when they started taking us.  For years, Cheri and I had perfect attendance records of church attendance.  Every Sunday Aunt Evie would stand me up on the church pew and tell me to sing.  She told me if I didn’t sing, her whole Sunday would be ruined. Then she would take my little hands in hers and tell me to pray that my daddy would give his life back to Jesus.  Every Sunday, week after week and year after year, she did this.  It became my greatest desire that my daddy would come back to the Lord.

One of the most significant things that has happened in my life was the consistent selfless act of my great aunt and uncle who made sure two little girls went to church.  Where many people look for what they can get out of going to church, this couple looked for what they could give.  We sat with them in the service.  They taught us how to sing in the congregation and even made me feel as if my singing affected everyone there.  I learned faithfulness, to love God’s word, how to pray – standing up on the pew, that God does indeed answer prayer, and a hundred ways to creatively, fold a cloth hankie during a sermon that I wasn’t old enough to understand.  These things I learned, sitting with an older couple who had already raised their own children, who didn’t need another set of toddlers to keep quiet in church.

I learned to love going to church.  I loved the Sunday school classes and the music.  It was several miles out of their way, for my great-aunt and uncle to pick us up, and yet they made the journey just so my sister and I could go with them.  However, because of the distance we left church as soon as it was over.  I would dream of the day when I could be the last person to leave the church.  To me, that would be the ultimate Sunday morning.

Every year Cheri and I would take part in the church Christmas program, and one year when I was about nine, my dad came to hear us sing and that day he gave his heart back to Jesus.  All of my prayers and dreams were coming true.  Later, as a family, we went to hear a gospel quartet sing.  I’ll never forget that night when, at the end, the singers invited anyone who wanted to give their lives to Jesus to come forward.  I watched as my entire family went to the alter.

It wasn’t long before my dad went to Bible school.  He told everyone, including God, that he wasn’t a preacher.  He knew since he was a young boy that if he served God, he would be a preacher, but he didn’t want to do that.  Feeling inadequate, he wondered what he might say, that anyone would want to hear?  God responded to his question, “You love to tell stories.  You can spend hours talking about your dogs and your hunting experiences.  Just tell your stories and I’ll fill in the rest.” So that is what he did.

Daddy didn’t know which Bible school to attend.  There were a few to choose from, but one night, in a dream, he saw a sign on the side of the road.  It read, “Visit Elim Bible Institute.”  He knew where that sign was, as it was not far from an auction house where he bought and sold cows, but knew nothing about the school.  After a few nights of dreaming about the sign, he decided to check the school out.  On the way, he prayed the Lord would guide him and that if this was the school he should attend, then they would receive him as a student that day.  It was mid-November, and it didn’t seem likely that they would take him in the middle of a semester, but he knew if God was in it, he would open the door.

Arriving at the school, he was met by a staff member who took him straight to the President’s office, and introduced my dad to the President saying this, “This is the man I was telling you about this morning.”  My dad never found out what had been said about him before he got there, but it was obvious to all that God was making a way for him to attend Elim.  It was also the first day of a new system they were trying out, quarter-mesters.  (To my knowledge, that was the only year they did this system.).  He was enrolled on that day and started attending classes that week.

My dad and grandfather sold our farm so daddy could pursue the ministry.  It was a season of change for all of us.  My mom went to work in a restaurant and later worked at a hardware store.  Daddy attended school full time, and joined my mom at the hardware store part-time, just to make ends meet.  I took over the house.  It was hard on us all, but it was a good hard.  To me, they were some of the best days of my life.

I was so excited that daddy was going to Bible school I couldn’t contain myself.  I would sit with him by the hour asking him one question after another. “What did they teach you?  Tell me what book you studied today.  What about end times, healing, prayer?  Really?  They said that?”  Some days I even skipped school to go with him.

Attending Elim was a shock to my dad.  The church we attended was a typical mainstream denominational church.  On Sundays we sang three hymns, said a few prayers and maybe a testimony or two, took up the offering, had a twenty-minute message, sang again, and ended with prayer.  Elim was nothing like that.  Oh, they sang hymns, but added scripture songs and choruses, that would be repeated while people lifted their hands in the air.  Sometimes when it would get quiet, you could hear people praying and when you did, often it was in some strange language.  His first day in chapel, Daddy leaned over to the guy next to him and asked, “What are they doing?”

“They are praying in tongues,” he whispered back.

“Tongues?  Is that what it was called?  Why I have been doing that my whole life,” Daddy said.  He had a powerful salvation experience when he was a boy.  One Sunday both of his grandfathers, one on each side, grabbed him by the arms and marched him up to the alter.  They prayed and prayed over him and from that day on my dad had this gift of tongues, but he didn’t know what it was.  He often told me he would pray in tongues while he was plowing a field or working in the barn.  He did it for fun, never realizing the power in his actions.  The Bible tells us that the Holy Spirit intercedes for us.  I thought how wonderful it was, that the Holy Spirit had been interceding for my dad, through his own prayers with an unknown tongue, never letting him go.

Likewise the Spirit also helpeth our infirmities: for we know not what we should pray for as we ought: but the Spirit itself maketh intercession for us with groanings which cannot be uttered.

And he that searcheth the hearts knoweth what is the mind of the Spirit, because he maketh intercession for the saints according to the will of God.

And we know that all things work together for good to them that love God, to them who are the called according to his purpose.