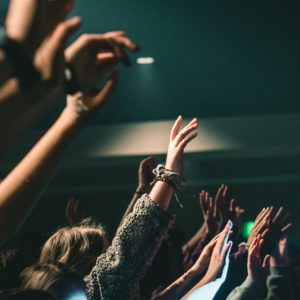 My dad attended Elim Bible Institute for three years.  He studied the Bible, grew in his understanding of God, and life got very exciting.  He became quite involved in our home church and would often tell everyone about all the things he was learning in Bible school.  Many members of my extended family attended that church, and they were all so happy to see the changes in my dad.  He would sometimes lead the worship, teaching us the new songs he had learned at school.  Sometimes he preached.  Then he prophesied.  Prophesy was unfamiliar to our church.  No one had ever prophesied before.  Not only that, but when Daddy prophesied, he was so overcome by the presence of God, that he would shout the words until it seemed the windows vibrated.  Then when he finished speaking, he would crash to the floor.  Once he crashed so hard on the platform, that the color completely disappeared from the knees of his pants.

We were a praying church, and revival was what we prayed for.  A music group from Scotland was singing in the area and they were invited to our church.  The air was full of anticipation as the group sang.  Their songs were simple, “I fell in love with the Nazarene.  I fell in love with him.”  But they were sung with such passion and obvious love for the Lord Jesus, that everyone could feel it.  People were singing and clapping their hands.  It was as if the clock’s hands stopped moving, and we were all caught up in time.  No one wanted to leave.  This went on night after night.  Often the alter would be full of people praying and crying to God.  Many were overcome by the Holy Spirit, both inside and outside of the church.  Several people felt drawn to come inside the church as they passed on the sidewalk. One even crawled in on his hands and knees.

We started singing as a family, and had many opportunities to sing in churches and would sometimes miss our own church services because we would be booked elsewhere, but on our way home, my dad would say, “I wonder what’s happening in our home church.  Let’s drive by and see if anyone is still there.”  When we arrived, everyone was still gathered together, singing and praying.  On those nights, it was normal to stay well after midnight.

Many people became born again and healed in those days.  I remember my dad and our pastor Randy (eventually he also attended some Elim classes), praying for people and seeing people set free and delivered from all kinds of problems.  One night a lady came to the front for prayer.  Her family was in a lot of trouble, and she seemed to suffer from mental illness.  Her entire body was covered with warts.  My dad started praying for her and commanded evil spirits to leave her.  At the end of his prayer, he finished with, “I command you evil spirits to leave this woman now, and take your warts with you.”  She fell to the floor like a dead person, but when she got up, she was changed. The next morning she woke up, and the worts were all gone.

I went to a special pastor’s meeting with my dad.  People were praying for each other and when it was my turn for prayer (I was the only child in the meeting), they asked me what I wanted God to do for me.  I said, “I want God to heal my lungs.”  I had suffered from pneumonitis and other lung issues since I had been six years old.  Every winter was hard for me, and one year I missed over eighty days of school because I was so sick.  Nothing seemed to happen that day, but I have never had those same troubles with my lungs since that day.  As a matter of fact, I can sing louder than anyone I know. My lungs are fine.  God was doing miracles in those days.

During this same time, Cheri and I were part of a Bible quiz team directed by Pastor Randy.  There were four of us on the team and we were champions.  We memorized as much Bible as we could, so we would be the first to have the correct answers.   Sundays, Cheri and I would stay at the Pastor’s home or with some other friends, practice our Bible quizzing in the afternoon, and then we would have evening church that lasted until late at night.  I finally realized my dream of being the last to leave the church.

This was near the end of my dad’s last year at Elim.  It had only been three years, but God packed so much into that time.  I was a young teenager when all of this was happening, and yet I felt like I had gained an education few ever have the opportunity to receive.   I saw people healed, families reunited, and marriages strengthened.  There was a lot of forgiveness asked for and given.  In all of my life, I have never seen such a powerful move of God.  Many people’s lives were changed in those days. And they serve the Lord to this day.  Not only that, but a new church was born out of that revival.  No one who experienced this time would ever the same.