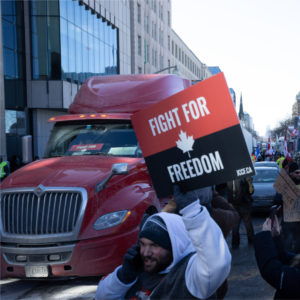 Some don’t stand with the truckers, considering what they have been doing in Canada to be irrelevant, but I don’t agree. This is a grass roots development that has the power to shake the Western Democracies from their lethargy into full-scale revolt against our corrupt, Progressive Deep State leaders. The truckers realize it’s time to fight back against repression.

Who are those who are revolting? Ordinary citizens just like you and me, that’s who. They’ve experienced enough repression, refusing to tolerate any more. In response, the dictatorial Left has reacted with further draconian measures, all in an ineffective effort to stop opposition.

Has the Left’s harshness worked? Hell no, it hasn’t. Instead, it has emboldened others to follow suit. In the USA, it’s time to do the same thing. If the truckers shut down Washington D.C., we’ll see what happens. If this happens, the malice of the Left will be on full display.

We can no longer sit idly by and watch our beloved nation systematically taken down and destroyed by those who hate us, who hate our Constitution and who hate our cherished heritage. It’s time to rally for justice, righteousness and the American way.

Remember the words of Edmund Burke: “The only thing necessary for Evil to triumph is for good men to do nothing.” Obviously, this includes women too. So, rise up, stand your ground and fight back in any way you can. America needs you now. Being passive is no longer an option. Be strong and resolute. Protest like there will be no tomorrow because there might not be.