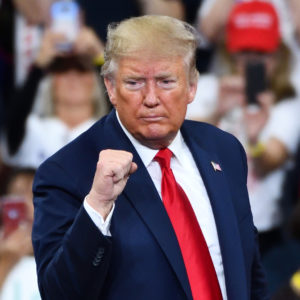 When I read something written by a Democrat concerning those of us who support President Trump, or watch what they have to say on TV, I can’t help but notice how angry they are. Even if they aren’t Radical Leftists who are rabidly angry, at bare minimum anger is always subtly present within them. It’s their most common character quality.

What makes this phenomenon so interesting is they routinely accuse us of being angry, but we are not. We are the exact opposite. They also accuse us of having anti-American values, which is definitely not true. We maintain the same values we were taught as children—love of God, love of family and love of country. So, what they are really doing is projecting who they are by vilifying us for what they say and do.

They hate us for being who we are and for refusing to allow them to remake us into a hateful version of ourselves. Most of all, they hate us for allowing ourselves to be deceived by the “Orange Man,” but we are not the ones who are deceived. They are.

Part of what makes Democrats so hostile, arrogant and condescending is they cannot drive a wedge between us and our steadfast support for President Trump. No matter what they do, and they have tried everything, they haven’t made any headway in their efforts to recreate us into who they want us to be.

There’s a reason why they have failed. They don’t understand what it is, but I can easily explain it with the following Bible verse:

Keep fervent in your love for one another, because love covers a multitude of sins (I Peter 4:8, NAS).

We love Donald Trump because he loves us. It’s obvious he loves us because he never stops working for us. Night and day he thinks about what is best for average Americans like you and me, but that’s not all. Unlike Democratic politicians, Trump’s policies put us first. His actions match up with what he says he will do. Biden’s don’t. We have seen this every day for four years and we love Trump for it.

Because his love for us is so great, we excuse his rough edges, and there are many. We don’t care. It isn’t that we don’t see these rough edges, we do. But, because love covers a multitude of sins, we don’t allow what is trivial to spoil the enormity of what is good. Based on the depth of our mutual love for one another, which is equally as empowering to Trump and to us, we happily embrace his leadership, his candidacy and his person, warts and all. This is why he will win a second term. You can count on it.