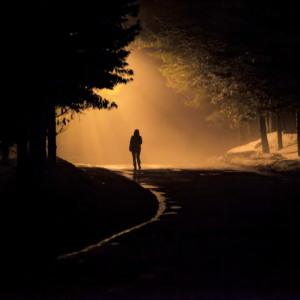 Sometime after midnight, an Arabian wolf could be heard in the distance.  The chickens in the backyards of the various homes scattered about cackling and fluttering at the sound.  Danger was in the wind.  They could feel it.

It was foolish for anyone with means to be caught on the dark streets alone at night.  It wasn’t safe.   Bloodthirsty men, like wolfs, often lurked about in the shadows, looking for an easy target.  And so, waiting until he was sure no one would be watching, the wealthy man snuck from shadow to shadow while his heart thumped hard in his chest and his hands trembled.  He knew that if he were caught, it would be the end of him.  He could lose everything, and he had too much to lose.

Yet something inside pushed him forward.  He had to see the man who spoke with such authority and see the hands that had worked miracles.  He had to know for himself.  Was this the Messiah that he had looked for his entire life?   Turning down another street and off in the distance, he saw him.  When he finally stood face to face, he said, “Teacher, you came from God, didn’t you?  No one could do the things you have done if they were not from God.”

Jesus looked at Nicodemus and replied, “Yes, this is true.  But you need to know something even more important than knowing where these miracles have come from.  My kingdom is not of this world.  Only those who have been born a second time can see the Kingdom of God.”

Nicodemus was confused.  How can a man return to his mother’s womb and be born a second time?  It made little sense. He was a scholar among scholars, a Pharisee.  He walked with the most learned men in the city.  His wealth was beyond measure.  Why, even his daughter was said to have great wealth.  His position?  He sat with the elite of the land and when he spoke everyone listened, and yet he didn’t understand the most important conversation of his life.

Jesus broke it down for him. “Listen, God loved everyone on this earth so much that he sent his only Son to save them.  No one needs to die.  All a person has to do is believe in God’s Son.  And because he believes, he will have eternal life.  This is being born a second time.  This is the truth.  You came hiding in the dark.  But if you really want to know the truth, if you really want to see The Kingdom of God, you have to come into the light.”

No one knows how long Nicodemus stayed, but surely the two talked long into the night.  Of course he had to go home – eventually.  He had business to take care of and Pharisee things to do.  One year went by, two and then three.  He had followed the teachings of Jesus from a distance.  He had to stay in the shadows, of course.  If his friends, neighbors, or other leaders among the Jews ever found out that he was a follower of this man, he could lose everything, and he had too much to lose.

One day the Teacher from Heaven was tried in the courts of man and was found guilty.  Guilty of what, no one really knew, but he was surely guilty and sentenced to die.  As the man who carried the sins of the world hung on a cross dying, Nicodemus could no longer stand in the shadows.  The words of the Teacher rang in his heart.  “If you really want to know the truth, if you really want to see The Kingdom of God, you have to come into the light.”  The day the Teacher died, Nicodemus came into the light and he believed.  He, along with his friend Joseph, carried the body of the Messiah upon their shoulders and tenderly rubbed the stiff body with spices and oils.  Everyone saw – everyone knew – just by the tears in his eyes and the tenderness of his care, that Nicodemus had been born again.  How could he not be there at that moment in time?  He had to come into the light. He had found the truth, and it was too much to lose.

Historians tell us he did indeed lose everything for following his Jesus.  His position among the Pharisees was taken away, his money and power gone.  Even his daughter was said to wander among the fields hoping to gather a little grain so they could eat.  Yes, it cost this man a great deal to let the world know he was a follower of Christ, and yet it was all nothing compared to what he gained.  Love, peace, joy, hope, and more bundled together with the knowledge of eternal life with his Savior Jesus the Messiah, settled upon him for the rest of his days.  He would never walk in darkness again.  He had too much to lose.

“For God so loved the world, that he gave his only Son, that whoever believes in him should not perish but have eternal life.  For God did not send his Son into the world to condemn the world, but in order that the world might be saved through him.  Whoever believes in him is not condemned, but whoever does not believe is condemned already, because he has not believed in the name of the only Son of God.  And this is the judgment: the light has come into the world, and people loved the darkness rather than the light because their works were evil.  For everyone who does wicked things hates the light and does not come to the light, lest his works should be exposed.  But whoever does what is true comes to the light, so that it may be clearly seen that his works have been carried out in God.” ESV

After these things Joseph of Arimathea, who was a disciple of Jesus, but secretly for fear of the Jews, asked Pilate that he might take away the body of Jesus, and Pilate gave him permission. So he came and took away his body.  Nicodemus also, who earlier had come to Jesus by night, came bringing a mixture of myrrh and aloes, about seventy-five pounds in weight.  So they took the body of Jesus and bound it in linen cloths with the spices, as is the burial custom of the Jews. ESV