Skip to content
TRUMP WAS WISE TO NOT BRIEF PELOSI & SCHIFF
President Trump is being criticized by Speaker Pelosi and Rep. Adam Schiff for not briefing them. along with other members of Congress, before launching the assault that killed the leader of ISIS, al Baghdadi. When asked why he didn’t inform them, Trump said that he didn’t want to jeopardize the operation with potential leaks.
Essentially, Trump said that neither Pelosi nor Schiff could be trusted with information that was this sensitive, but was Trump justified in doing so? In my opinion, he definitely was.
Where Pelosi and Schiff are concerned, I believe their deep-seated hatred for Trump is greater than their patriotism or their desire to see al Baghdadi brought to justice. If Trump had briefed them, I have no doubt these two nefarious scoundrels would have leaked the information to the press and the entire operation might have been compromised, but I think they are even more devious than this.
I think they would have tried to undermine the assault in the hopes that it would have been a complete failure rather than what it was, a complete success. If our assault team had sustained numerous casualties and Baghdadi had escaped, Trump would have looked like an incompetent fool. This would have aided Pelosi’s and Schiff’s impeachment effort significantly. In other words, I believe Pelosi and Schiff would rather that the mission would have failed than succeeded.
You might ask, do I actually believe Pelosi and Schiff are capable of such cynical treachery? My answer would be, “Yes, absolutely I do.” They hate Trump more than they love America, and I believe they are capable of incredible villainy to accomplish their goal of removing him from office, regardless of what it takes to do so. Thus, keeping them out of the loop was wise. 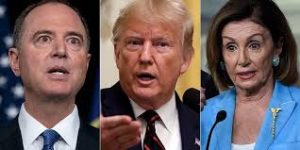