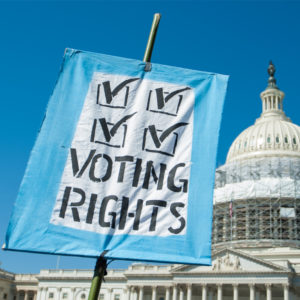 Voter fraud should never determine a Presidential Election in the United States of America. Being as wrong as wrong can be, this should never be permitted to happen, but here we are. It has happened. Only a fool, or someone who is willfully ignorant, would deny this has happened. The Democrats have cheated by maximizing their fraudulent efforts in Atlanta, Philadelphia, Detroit, Milwaukee, Phoenix and Las Vegas.

In any contest, including all sporting events, if you are caught cheating, you are disqualified. It’s as simple as that. If cheating is allowed to be rewarded, then the integrity of the sporting event becomes compromised. It’s the same for a political election.

In the 2020 Presidential Election, Biden’s victory isn’t legitimate. It isn’t real. He won fraudulently and an increasing number of people are becoming aware of this every day. Like the coming in of the tide, increased public awareness is relentlessly occurring. Trump’s position is not sour grapes or a Rightwing conspiracy theory. It’s true and people worldwide recognize it’s true.

The votes counted late at night from the swing states put Biden over the top, but they didn’t come from legitimate voters. They were fraudulently manufactured. Anybody who pays attention knows this, but will Biden be allowed to get away with what he and his co-conspirators have done? Can he become a legitimate President by cheating his way to victory? The simple answer is, yes, he can but only if Americans stand down and allow our nation to be subverted by this injustice.

With all of the lawsuits being filed by President Trump’s campaign lawyers, people wonder if this is the way to achieve justice? Will it work or won’t it? Can the outcome of the election be reversed? The simple answer to these questions is also, yes, but it’s definitely an uphill fight.

Biden has presented us with a fait accompli. Undoing his mischief will be difficult, but it can be done.

In my estimation, our most solid legal argument is founded on the Equal Access Clause of the 14th Amendment. The courts have used the 14th Amendment since the Civil War to end voter intimidation, voter suppression and voter fraud.

Since I live in Fulton County, Georgia, where a great deal of the voter fraud occurred, let me explain the basis for our justified grievance using me as the example. When I went to vote for President Trump and Senator Perdue on November 3, 2020, I had to show my driver’s license to prove who I was. I also had to sign an affidavit that was checked against my voter registration signature. To be able to vote, I had to prove I was John T. Watts.

To correct this, to make it right, and to not infringe upon my rights by making my procedure more cumbersome than others, the only fair thing to do is to “throw out” all of the mail-in votes where the signatures were not validated. This is a solid legal argument—one with substantial precedence. If the courts agree, and they might, the fraudulent ballots will be excluded and Trump will win Georgia. Once Georgia falls, other states will the same issue will follow.