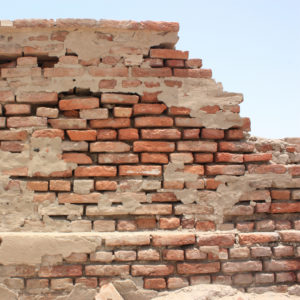 “Grandfather, how will I know what to do? You have told me so many times that I am special. But what does that mean? What will I do that is so important?”

The old man leaned over and scooped up the tiny girl. She was small, but he could see that there was greatness in her. He loved all of his grandchildren, but this one, well, she was his favorite. “Oh my little Rabu, when the time comes, you will know.”

“But Grandfather, how will I know? Can’t you tell me anything?”

Her grandfather wasn’t a religious man, but on the day that she was born, his eyes opened, and he saw her redeeming the whole family. A voice from the heavens spoke to him and told him to keep her safe, to protect her, because she was special. As quickly as the words had come, they ended. She was special, but just how special he would never know as he died a few years later.

The grandfather left his family with his home built on the city wall and a mountain of debt. Rabu’s parents were crippled in a wagon accident and couldn’t work, and her siblings were too young to work, so it was left to Rahab to keep the creditors away and her family fed. She sold figs and oranges, but it wasn’t enough. She even tried to raise goats to sell, but they had all died in a barn fire. The only thing left for her to sell was her body, but she was beautiful and had no trouble bringing in customers. At first, it was hard to be with the men who would come to her door at all hours of the day, but she decided it was what she needed to do for those she loved. And so it was that the debts were paid and the little ones cared for. Perhaps this was the greatness her grandfather had always told her about.

It was the whispers on the street that first caught Rahab’s attention. Then it was the fear in the voices of the men she serviced. They spoke of an army with magical powers, men who could jump over walls, and their God who would send fire from the heavens that could wipe out entire villages. Some stories were exaggerated, and yet she could tell there was some truth to what was said. Survivors from neighboring areas came to tell stories that made even the bravest tremble.

Camping not far from Jericho, an army gathered, and their commander Joshua sent two men into the walled city to spy out the land. Rahab quickly took them in. When she did, the words of her grandfather came back to her. “You are special. When the time comes, you will know what to do.” Rahab invited the men into her home and hid them from the king. She said to them, “I have heard the stories of your God, and I know that He is great and will give you this city. When you return with your army, save my whole family and me. A deal was made, and a red cord left hanging from her window.

When Joshua arrived with his army, they marched around the walls of the city for seven days. On the last time around, the walls began to shake and crumble. When the dust cleared, only the home of Rahab still stood. Rahab, along with her whole family, was saved because of the bravery of one little woman.

Most people would look at Rahab and disqualify her from greatness. Her occupation marked her as a sinful woman, and yet God had a plan. God has a plan for you, as well. You are called to greatness, and there will be a day when your eyes will be opened, and you will know what to do. Following the plan and will of God is not hard. Just keep trying and keep going on, never giving up on your future, never giving up on your family, and never giving up on your nation. You put one step in front of the other. Always facing forward, never looking back. And when all around you is shaken, and fallen, and the dust settles, you will still be standing.

You have been called to greatness!

“For many are called, but few are chosen.”