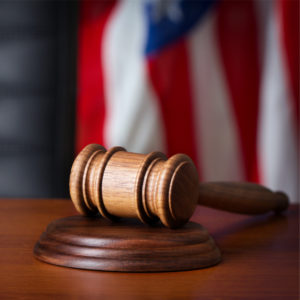 I have always loved movies and TV shows that have courtroom scenes as part of the drama. I especially like it when a defense attorney rails about some perceived injustice, only to be admonished by the judge to stop, sit down and be quiet. Banging his gavel, the judge says that the attorney will be held in “contempt of court” if the lawyer utters one more word. Then, in contrite compliance, the attorney, being completely penitent, supplicant and remorseful, submits to the judge’s authority.

In all of these televised dramas, the one constant theme is the respect for the court’s legitimate authority that is revered by all. This legitimacy is the bedrock, the foundation of our entire judicial system. Without respect for the authority of the court, the future of our democratic republic would be in jeopardy. Although criminals don’t respect the court’s authority, nearly every other American does . . . at least until recently.

Based on what state courts, federal courts and even the Supreme Court have refused to do since the Presidential Election in November, many Americans no longer have the respect or the reverence for our judicial system that they have held their entire lives. Millions have lost confidence in our courts, believing they have not only let us down, but have also provided aid and comfort to criminals. Essentially, the courts have validated those who have perpetrated a massive fraud against the American people.

By refusing to hear any of the evidence compiled, choosing to use technicalities to avoid doing their job, the derelict judiciary has made it seem like court after court has determined Trump’s case has been meritless. At least, this is how it has been interpreted by the media. This has helped journalists sell this deception to millions of gullible Americans.

By skirting their responsibility, the courts have not only made it seem like Trump is nothing more than a whiny loser, but they have also dismissed as unimportant the votes of at least 74 million people. To these judicial cowards, we have no standing. By the abdication of their judicial commission, these judges believe they have protected themselves from criticism, but this isn’t true.

Instead, they have embittered millions, while inviting massive contempt upon themselves. The respect they once held has evaporated practically overnight—just as quickly as our Freedom of Speech has. When the history books are written about what has transpired, don’t look for even one American judge to have a chapter in “Profiles in Courage.” To their shame, not one of them has displayed even an ounce of courage.