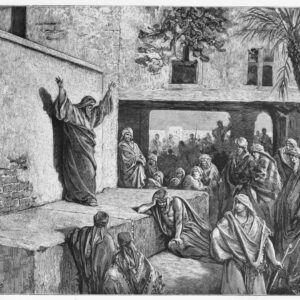 Maybe it was the pandemic or the 2020 election, but remember not all that long ago when the “internet prophets” rose up and had…pretty much daily words “from the Lord”? Don’t worry. I’m not getting political–wouldn’t even think of going there. But I am going to get Scriptural–like in the Bible.

I remember that night of November 3, 2020 well. I had a bucket load of snacks and was prepared to watch the election results. But as the hours ticked by and the counting appeared to be reduced to a snail’s pace, I went to bed knowing full well that nothing would be decided that night. But I had no idea just how many nights would come and go before the results were final.

During the weeks while we waited, the voices began to speak–some even given high-level platforms from which to do it. It’s important to remember that not one or two but MANY churchy, “propheticy” voices said that Donald Trump would be re-elected and serve a second term. Even after the results were official and that did not pan out, there were “words” that said something would happen–next week or on July 4th, or some other upcoming date–in which Trump would magically fly into the White House and Biden would simultaneously fly out.

Later, some of those voices admitted that they had not heard from God but rather liked the high-level, viral attention their messages received (much more than their Sunday morning services) and so they spoke what “upped” their likes and views. But it wasn’t God’s view and He didn’t like it.

Some repented. And that’s good. Some didn’t. Not so good. But the point is…we are now at this juncture once again. I’m not here to debate with anyone what happened under which administration. We all have eyes and ears and bank accounts that we watch increase or decrease. Enough said. But what I am here to say is that those weeks back in the fall of 2020, where we watited it out, were stressful. Not so much to see who would win, but rather to make sense of all the prophecies that proved incorrect.

The world looked at us, the charasmatic church–yeah, the one’s prophesying–and thought we were nuts. Other countries did the same. I mean, how can you have a multitude of voices saying a certain thing is going to happen, entire broadcasts devoted to it daily, and it doesn’t happen. Like not even a little. It goes completely in a different direction.

Donald Trump has declared his intention to run in 2024. The world is watching. Other denominations are watching. Foreign countries are watching. Within the mouth of a true, prophetic voice is residential creditiblity. What does that mean? That means we speak what God speaks only. We pray for impeccable timing and the ability to deliver the word with pinpoint accuracy. We do not give words that will attract deep-pocketed donors to our ministries, or whip those who are like-minded into a spiritual frenzy. That kind of foolishness has absolutely nothing to do with hearing from Heaven.

Joel prophesied that in the last days God would pour out His Spirit. It was confirmed in Acts. One of the five-fold ministries is that of a prophet, and one of the gifts of the Spirit is prophecy. Speaking under divine influence is a real thing–a Bible thing. And listen, none of us is perfect. But until one’s mouth can be tempered enough, and the spirit governed enough to speak only what God speaks, it’s best to just shut up. And if the voices start talking of their own accord once again, I endorse your decision to change the channel.