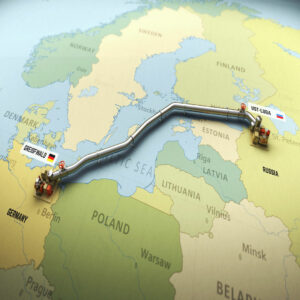 In the United States, the mainstream media is very busy trying to sell is on the idea that Russia sabotaged the Nord Stream Pipeline themselves. News outlets aren’t just trying to convince us that this is true, they are demanding that we believe them. They are telling is that anybody who doesn’t go along with their narrative is aiding Russia’s disinformation campaign, implying that it’s un-American to question them.

But did Russia sabotage their own pipeline? Is this truly what happened, or are we being deceived into believing something that is blatantly false? I believe it’s the latter. Once again, we are being conned by the Biden administration and the “Fake News” media. Why am I convinced about this? It’s because their narrative doesn’t make a lick of sense.

Why would Russia undermine its struggling economy’s only potential source of major revenue? It wouldn’t. Economically, it makes absolutely no sense for Putin to destroy the pipeline. Politically, it doesn’t make any sense either. With Russia supplying energy to Western Europe, it strengthens the Kremlin’s power in the region while undermining the dominance of NATO. This has been Russia’s major foreign policy goal since the end of World War II.

The destruction of the Nord Stream Pipeline, however, is in the best interest of the USA. It cripples Russia’s economy and its war effort in Ukraine. It also keeps Western Europe within our sphere of influence, which has been our primary foreign policy goal since the end of World War II.

Just because it’s in our best interest doesn’t mean the USA attacked the pipeline though. I doubt that it was the USA directly because, if it was and could be proven that it was, this would be the USA attacking Russia directly, which definitely could lead to thermonuclear war. That’s an outcome nobody wants. This means the attack was probably made my Poland at the behest of the USA.

Regardless of who it was, Russia wasn’t the only big loser. Western Europe, especially Germany and the Scandinavian countries, are also big losers. They need the natural gas from Russia to heat their homes and, since Biden’s policies have crippled fracking in the USA, we are no longer able to provide Europe with the much-needed natural gas. Before Biden, we were able to compete for the energy needs in Europe. Now, we can’t. If we could, our struggling economy would get a major boost, but this would go against the Democrats’ Green New Deal agenda.

To have attacked Nord Stream hurts our allies as much as it does Russia. They don’t have the energy needed to heat their homes this winter.

There is strong evidence that the USA was behind this attack. To begin with, in February, Biden stated publicly that we would destroy the pipeline. There is footage of him saying this, and his statement was coherent. Also, helicopters were in the area when the attack occurred. So, in my opinion, the media and the administration have once again joined forces to try and deceive us into believing their lies, but the facts contradict their ridiculous narrative. The USA was behind this. Anybody with a brain knows this.