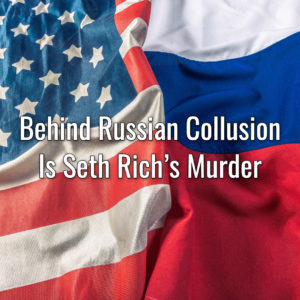 Now, more than ever, it is crucial for Americans to know and understand exactly what is happening in our great nation. Being unaware is no longer a safe option. Take Russian collusion for example. Although millions of uninformed Americans continue to believe this really happened, the Russian Collusion narrative has now been completely debunked. The testimony of many has made this clear.

It was created to provide an alternative explanation to what really happened.

It began with the hacking of the server in the headquarters of the Democratic National Committee (DNC). Once hacked, the stolen information was sent to Julian Assange at Wikileaks, where some of it was published to embarrass the Democrats and their 2016 Presidential candidate, Hillary Clinton.

Not long thereafter, an employee of the DNC, Seth Rich, was gunned down crossing the street in the Bloomingdale area of Washington D.C. He died two hours later. His murder was briefly investigated as a robbery, despite the fact that nothing was taken. Just twenty-seven-years-old, Rich was an avid Bernie supporter who was offended that the DNC was stacking the deck against Bernie in favor of Hillary.

Because of the speed in which the server was hacked, it could not have been accomplished by an outside source. That would have been impossible to do. Therefore, Russia could not have done it as the Democrats have maintained for years. This means it was an inside job. I believe Seth Rich did it, using a thumb drive. He sent the contents to Assange. This is probably why Assange offered a $10,000 reward for the arrest of Rich’s murderer, but no arrests were ever made. It just became another D.C. cold case.

When the FBI wanted to do a forensic analysis on the hacked server, the DNC refused, saying that a private company, CrowdStrike, was doing the job. Think about this for a minute. Since when does the FBI ask for permission to investigate a crime? And when have they ever accepted “No” for an answer? That they were willing to do this is implausible.

Even more interesting, CrowdStrike was a Ukrainian company. Despite everything that was at stake, the FBI inexplicably walked away from an investigation that had earth-shattering implications. Why would they do this? It’s because FBI Director Comey had his foot on the scale.

Now, fast forward to President Trump’s telephone call to Ukraine’s new President, Volodymyr Zelensky in the summer of 2019. On the call, Trump asked Zelensky to investigate CrowdStrike. In my opinion, Trump was trying to get to the truth about the hacking at the DNC as well as the murder of Seth Rich. Investigating Biden was a secondary issue.

The Democrats knew this as well. Recognizing that the uncovering of what was really behind the murder of Seth Rich could lead to the unraveling of the Democratic Party, to deflect from their crimes, the Democrats Impeached Trump over the telephone call. To anybody willing to pay attention, to Impeach a President over something as trivial as a phone call didn’t make much sense but, if you connect the dots to what Trump was really attempting to accomplish, it makes all the sense in the world. He wanted the truth to be revealed about the Ukrainian company.

The American people may not understand the nuances of politics, but they understand the murder of a twenty-seven-year-old. If average citizens ever put it together that Rich was shot in the back twice for sending a massive number of documents to Wikileaks, the Democrats will be relegated to a splinter Party for a decade. It’s a fate they richly deserve.