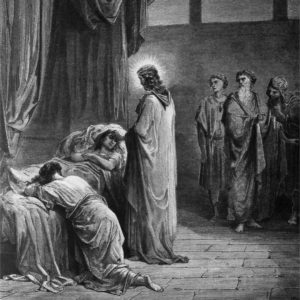 He made it.  Jairus had struggled just to get to the right place and when he got there; he took a sigh of relief.   He just hoped it wasn’t too late.  Jairus took hold of the hand of Jesus and asked him to go to his home, where his daughter was sick.  “My daughter is dying, Jesus.  Come quick. I don’t know what else to do, please.  Please come quickly.”

So off they went, Jesus following the worried leader of the synagogue.  While they were on their way, a woman, a very sick woman, was crawling in her hands and knees, hoping – believing that if she could just get close enough, she could touch the hem of the garment that Jesus was wearing.  She knew that if she could touch the hem of his coat, she would be healed.   If she could just get close enough.  But there was a crowd surrounding Jesus and Jarius.  It was very difficult for her to get close, but she did.  She made it and she touch the hem of his garment and immediately she was healed.  Jesus stopped and looked around to find out what had happened. He knew that power had left him and he asked who had touched him.  Peter said why are you asking who touched you!  There are people all around you.  Yet Jesus knew that one certain person, one special person, had touched him and had received a miracle.   So he stopped, and he waited until the woman stood and said I am the one who touched you.

After Jesus sent her on her way, a young man from the house of Jairus came and said, “Master, don’t trouble Jesus any longer.  Your daughter has died.  It’s too late.”

Jesus replied, “It’s not too late.  Trust me, it’s not too late.”  So they continued on the journey.  When he arrived at the home, people were crying and repeated what the servant had said.  They even mocked Jesus for refusing to believe that he had arrived too late. But Jesus said, “No!  She’s not dead.”  He took her by the hand and told her to get up.  Immediately, her spirit came back into her and she was no longer dead, but alive.

Many of you have been told by others that it’s too late.  I think how Jairus stood there and allowed Jesus to bring healing to that woman touching the hem of his garment, how he stood there and didn’t compel Jesus to leave her.  Jairus didn’t argue that she wasn’t supposed to be out among people because she was bleeding and unclean.   He didn’t say to Jesus, “Stop talking to this woman.  I came to you first.”  He waited.  And while he waited, his little girl died.

Perhaps you are like Jairus.  Perhaps you’ve asked Jesus to do something for you.  You needed his help.  You needed a healing in your body, and then someone says, “Face it.  Face the facts, it’s too late.  You didn’t make it in time.  Why continue to hang onto your faith?  You might as well give up.  It’s too late!”

Luke 8:50 But Jesus, hearing it, answered him, Fear not: only believe, and she shall be made whole. ASV