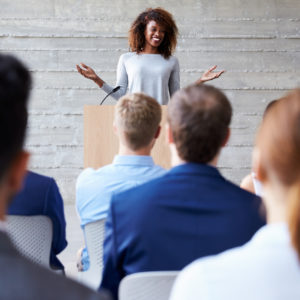 I wrote this blog last year and thought it fitting to repost. So many are fearful right now–that is understandable. May this inspire us to “roar back” rather than succumbing to the anxiety of the day as we allow the Lion to rise up from within!

When you enter a room full of people, do you command the room, or does the atmosphere in the room command you?

The event was called “Heels to Flip Flops”. It was a large one-room venue with everything that a woman who had been in heels all day could ask for. There were make-up artists ready to work their magic, nutritionists, wine tasting, zumba, canvas painting, and even an auction with designer handbags.

In addition, every ten minutes, a speaker was designated to take the platform and speak on a specific topic. My time slot was 10:10 p.m. Now, anyone who knows me well, knows that by that time I’m in bed or working my way there. Adding to my tiredness, on that particular afternoon, I had butted heads with my boss. So much so, that I still had a lingering headache hours later.

To top it off, as soon as I walked through the event center doors, one of the speakers had just finished her “10 minutes”. She came down off the stage looking forlorn, walked right up to me and complained, “No one listened to a word I said.” She was right. Even though a small podium, stage and microphone were provided, no one could hear over the robust excitement of several hundred women who were so glad to be in their flip flops and intoxicated with the choices before them.

It was fun chaos, but not exactly inviting for a public speaker waiting in the wings.

About 9:30 I stepped into the ladies’ restroom with my daughter, April, who had accompanied me to the event. “I’m going to tell the host that I don’t feel good and beg her forgiveness for leaving before my time to speak. I’m too rattled from the day, no one is paying attention to the speakers anyway, I’m tired, I just want to go home.” Looking back now, I can’t believe that was all it took to send me packing. Where was my constitution that normally said, “I’ll never quit!” Where was my, “I’m going to do what I came here for?” What happened to my passion to build people up?

I had gone to foreign countries with nothing more than a “go pray” in my spirit, and never questioned it. Now I was letting the earlier confrontation with a boss, who had no real managerial skills, and a noisy room take me out? I was going to forfeit an opportunity to deposit a word into those present because it was past my bedtime?

April and I went back to the podium area and sat in two of the empty seats listening to the speaker before me talk about a new anti-aging cream. The make-up artists off to the side had ladies lined up waiting for their metamorphosis. The music was blaring; eye shadow was being blown off brushes, creating a colorful haze and the clock was ticking. It was almost show time.

Noticing my anxiety coupled with frustration, April turned toward me with the piercing gaze of Superman and said, “Command the room.” Me: *deer in headlights look*. “What?”. April: “What would Aimee Semple McPherson do?” It was then I remembered that Aimee would take a chair and put it on the sidewalk, get on top of it and point toward heaven as she gazed upward. When she attracted a crowd, she jumped off the chair, said, “Follow me!” and would run in a building–crowd following close behind her–and when she had them assembled inside, she preached to them. Aimee was an apostle, a builder, and she was creative in putting one brick on top of another.

Just as the clock struck 10:10 p.m. I noticed a chair had been left from the botox demonstration, right in front of the podium. I figured, if it was good enough for Aimee, it was good enough for me. I had ten minutes to build something into the people there and I wasn’t going to sacrifice the opportunity. It was time to command the room.

I grabbed the microphone from its stand and stood on the chair. In a booming voice I asked, “Who here has a dream?” I felt something hit me like a lightning bolt. A courage, a boldness. All of a sudden, people stopped moving, looked around as if to say, “What in the world was that?”

I asked again, “Who has a dream?” Women who were headed for the door carrying their swag bags, stopped, sat down and started filming on their cell phones. The videographer who was capturing the event off to the side, rushed in front of the chair I was standing on.

I asked again, “Who has a dream? If you have a dream, make a line across the front of the stage.” I didn’t suggest it, I commanded them to get up there without hesitation. The make-up artist was the first, abandoning his make-over hopeful halfway through her lipstick application. I went on for 10 minutes teaching those dreamers that if you are going to say “yes” to your dream, you must say “no” to the thing that is keeping you from walking in it–including people. Ten minutes later, those lined up in front, those who had now filled the seats and even those standing off to the side filming, were all shouting “no, no, no” when I asked them if they were going to continue to let lesser things steal their dreams. We shouted “no” in about seven different languages.

There were even some tears being shed as a new awakening had come: life is short and regret is real. Decisions were being made and resolve was in the atmosphere to build, rather than let circumstances pull apart. The truly amazing thing was, it was not even a Christian event. Because of that, I did not use Scripture. But as I trusted the Holy Spirit, He moved with might and power in that room and it seemed even the air particles were stirring–bringing once dormant vision to life again.

And the make-up artist, I found out later, had just been promoted and he was transferring the next day out of town, but had been suffering persecution at work from others who felt they were “more worthy”. He was the one that yelled “no” the loudest. He admitted to coming in that night feeling beat up, but was leaving feeling built up. The Holy Spirit specifically singled him out to me: “This young man is someone’s son. Treat him how you would want someone to treat your son.” I knew in that moment that this fella had a special calling on his life. Part of my assignment that night was to build him up–to speak life into him and prepare him for the next chapter of life. And that is what the apostolic anointing does. It builds the kingdom and the kingdom is made of people–when you build people, you build the kingdom.

What had happened? I took a lesson from Aimee. I commanded the room.

Recently I found one of Aimee’s most popular sermons, “Praising the Lord”. It is a perfect example of how two people can enter a room and one falls prey to negativity and darkness, being swallowed up by it. While the other person can enter the same room and set off a spark that builds an atmosphere of glory. I’d like to share it with you:

Two saints attend the same meeting. One enters with a long face, takes her seat, looks solemnly about and exclaims, “Oh, Lord, what is the matter here? There is such a binding spirit, such a power of darkness.” Immediately every eye and every thought is directed to the devil, to darkness and binding spirits, and of course—like Peter when he got his eye on the waves—when we get our eyes on the devil, we have them off Jesus. When we advertise and meditate upon the greatness and strength of the devil, and show fear, we underestimate the power of the great I Am, the Mighty Conqueror who never lost a battle.

The other saint enters the same meeting, where it seems that not one breath of heavenly gales is stirring, feels the same pressure upon the meeting, and refusing to look at or recognize the enemy, says: This is the time to praise our Jesus. Thy glory and presence fills the heavens and the earth. They fill my heart just now. It overflows and fills this room.”

Such faith and praise is contagious. The fire of unwavering confidence in God that burns within this temple soon leaps over its parapets, spreads first to those in the seats nearby, then on to the farthest corner of the room, inspiring, encouraging, lifting up drooping heads, strengthening feeble knees, and in a moment every eye is fixed on Jesus … the Latter Rain is heard pattering on the roofs, running down the troughs, overflowing the rain-barrels, the dry ground is saturated, and the wilderness and the desert places are blossoming as the rose!

Not everyone is called to be an apostle, but we should all learn to flow in the apostolic anointing. Ephesians 6:10 says, “Last of all I want to remind you that your strength must come from the Lord’s mighty power within you.” Whether you feel like it or not, and sometimes you will not, God’s mighty power abides in you. Accept that and claim it by faith, then act as if it were true and watch the Holy Spirit manifest.

We should ALL take a lesson from Aimee and learn the art of commanding the room, the sickness, the mind, the emotions or anything else that tries to make us cower.

2 Tim 1:7 reminds us: For God did not give us a spirit of timidity (of cowardice, of craven and cringing and fawning fear), but [He has given us a spirit] of power and of love and of calm and well-balanced mind and discipline and self-control.